Zaha Hadid 1950-2016: Patrik Schumacher has paid tribute to the "empowering" and "unprecedented" architectural moves developed by his former partner Zaha Hadid, who died unexpectedly in March following a heart attack.

Schumacher, who was Hadid's co-director at Zaha Hadid Architects (ZHA) and is now set to lead the business, posted a tribute to his former boss and collaborator on Facebook on Saturday.

"When I first encountered Zaha's work as a young student in Stuttgart University in the mid 80s it was like a shock of revelation," he wrote. "There was nothing like this. The bounds of architectural possibilities had shifted."

Hadid died in Miami at the age of 65 after suffering a heart attack while in hospital being treated for pneumonia. She was one of the world's most celebrated and divisive architects.

Hadid was known for combining swooping curves with unusual angles in her buildings, with examples including the double-humped Heydar Aliyev Centre in Azerbaijan, the Pringle-like roof of the London 2012 Aquatics Centre, and the Maxxi Museum of Art in Rome, which features curving gallery walls.

"Zaha had delivered an unprecedented expansion of the discipline's repertoire, offering new degrees of freedom to the designer," wrote Schumacher of his earliest encounters with Hadid's work.

"What we did not yet grasp at the time – and I doubt that Zaha herself or anybody else fully understood this at the time – is the performative empowerment that these new options and degrees of freedom delivered to us as problem solvers: Zaha had expanded architecture's universe of possibilities." 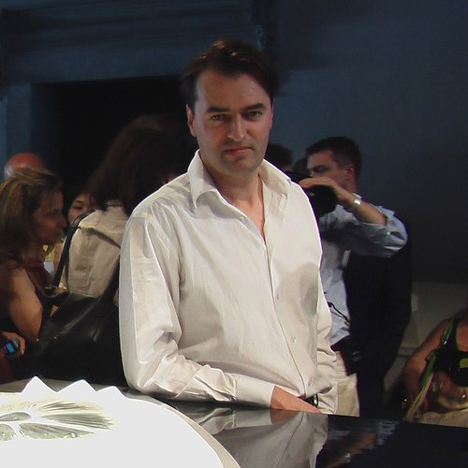 Schumacher said that Hadid had developed a new architectural language with techniques or "moves" that might have previously seemed "surreal or absurd", and titled his tribute Zaha's Incredible Moves.

Perhaps the most important of these was treating her rapidly produced, curved sketches as literal drawings of a building, rather than as ideas or "an ideal geometric form, which was meant to be rationalised into straight lines and arcs".

"A new language of architecture with a much increased problem-solving versatility, and with a much richer, more expressive and more communicative repertoire of organisation and articulation was born," said Schumacher.

He also said Hadid had created a new type of architectural image making, with multiple perspectives that created a depth later achieved and mimicked using computers. And he credited the architect with introducing "gradients" into architectural form-making.

Schumacher, who is one of the champions of Parametricism – a style of architecture that creates organic forms from computer algorithms and programs – said that her work had created new ways of thinking about and designing architectural spaces.

Iraqi-born Hadid was one of the most successful female architects in history, and was the first woman to receive the Royal Gold Medal for architecture in her own right.

Hadid met Koolhaas while studying at London's Architectural Association in the 1970s, and the two formed a lifelong friendship.

Nicholas Boyarsky, son of former AA director Alvin Boyarsky, said that Hadid had been instrumental in championing the importance of drawing in architectural education, even while she was a student.

"She was part of a mini-rebellion against the prevailing early 70s ethos in architectural education when many students did not really draw or design but talked instead of megastructural systems and processes, alternative lifestyles and so on," he told Dezeen. "Zaha and her friends went to Alvin and demanded to draw architecture, and Alvin set them up with an independent studio. I guess the die was cast from that point."

Schumacher became a partner at ZHA in 2002, and had been Hadid's co-director and senior designer in the years before her death.

In April, Zaha Hadid Architects announced it would carry on without Hadid.

When I first encountered Zaha's work as a young student in Stuttgart University in the mid-80s it was like a shock of revelation. Her sketches, drawings and paintings delivered not only the shock of the new but at the same time displayed a virtuoso intricacy, sophistication and perfection that made them utterly compelling. There was nothing like this. The bounds of architectural possibilities had shifted. Architectural design gained a whole new dimension and level of excitement for me.Up to then I had been doubtful whether architecture was the right choice for me. No more. Zaha indicated how architectural design could be an unexpectedly challenging and exciting adventure.Zaha had indeed delivered an unprecedented expansion of the discipline's repertoire, offering new degrees of freedom to the designer, and as students we were quick to appropriate and run with the new audacious moves made available. In very general terms these moves delivered spatial compositions with a new level of versatility, complexity and dynamism.What we did not yet grasp at the time – and I doubt that Zaha herself or anybody else fully understood this at the time – is the performative empowerment that these new options and degrees of freedom delivered to us as problem solvers: Zaha had expanded architecture's universe of possibilities, i.e. the designers' search for space in which solutions are looked for and might be found, unprecedented solutions. The constraints of the former restricted spaces look like arbitrary dogmas.

What were Zaha's major expansionary moves? Of course there is the abandonment of the right angle in exchange for hundreds of new angles that could be utilised. However, this was a general (rather than her unique) feature of what soon was christened "deconstructivism".

I would like to focus on three wholly original and empowering "discoveries" that Zaha gifted to our discipline. However, these moves must have seemed utterly surreal or absurd at first. I guess that's why nobody else had ever hit upon them.

There is first of all the move of translating the dynamic curvelinearity of rapid calligraphic sketching literally into an architectural drawing that was then read as an intended geometry to be built – rather than treating the curvature of a rapid sketch as a rough accidental indication of an ideal geometric form which was meant to be rationalised into straight lines and arcs. Zaha's curves display continuously changing curvature and thus offer more versatility. Further, as a function of the changing centrifugal force of the rapid hand's/pen's acceleration and deceleration, the curves and curvilinear compositions display lawful and coherent trajectories that we can recognise as coherent and legible figures, each with its own poise, dynamism or degree of fluidity.

A new language of architecture with a much increased problem-solving versatility, and with a much richer, more expressive and more communicative repertoire of organisation and articulation was born. The surreal move was redeemed and instrumentalised by taking these sketched curves, hardlining them with the use of an expansive range of "French curves" or "ship curves" and by thus taking them seriously as the elements with which to solve the plan.

There was the second, equally surreal move, with equally surprising performative fertility. Zaha built up pictorial spaces within which multiple perspective constructions were fused into a seamless dynamic texture.

One way to understand these images is as attempts to emulate the experience of moving through an architectural composition revealing a succession of rather different points of view. Another, more radical way of reading these canvasses is to abstract from the implied views and to read the swarms of distorted forms as a peculiar architectural world in its own right with its own characteristic forms, compositional laws and spatial effects.

One of the striking features of these large canvasses is their strong sense of coherence despite the richness and diversity of forms contained within them. There is never the order of monotonous repetition, but the field continuously changes its grain of articulation. Gradient transitions mediate large quiet areas with very dense and intense zones. Usually these compositions are poly-central and multi-directional.

All these features are the result of the use of multiple, interpenetrating perspective projections. Often the dynamic intensity of the overall field is increased by using curved instead of straight projection lines. The projective geometry allows to bring an arbitrarily large and diverse set of elements under its cohering law of diminuation and distortion.

The resultant graphic space very much anticipates the later (and still very much current) concepts of field and swarm. The effect achieved is very much like the effects currently pursuit with curvilinear mesh-deformations and digitally simulated "gravitational fields" that grip, align, orient and thus cohere a set of elements or particles within the digital model.

The third move was the introduction of gradients into the repertoire of architecture. All three moves came together in the potent landscape analogy which Zaha had posited as a guiding inspiration.

Instead of dissecting and ordering space by walls the landscape, [this] analogy suggests a continuously flowing space where zones bleed into each other, where transitions are soft, where a smooth topographic ground relief – rather than hard edges – structures spatial relations.

More from Zaha Hadid and ZHA