Rio 2016: car brand BMW has worked with the US Paralympic team to create a racing wheelchair that they claim to be both faster and more comfortable than previous models.

The DesignworksUSA team at BMW worked with the athletes to create a more aerodynamic chair that they claim shaves of 15 per cent of the drag during racing.

Although at a glance it appears to be much the same as older models, the team made subtle adjustments to the wheelchair including the use of carbon fibre and small angular changes to the frame.

"With cycling, bike manufacturers can make bikes for the Tour de France and know there's a massive enthusiast market out there that will buy bikes, too," associate director Brad Cracchiola told Fast Company. "But it doesn't translate [with wheelchair racing], so you don't get companies investing in innovation for racing wheelchairs." 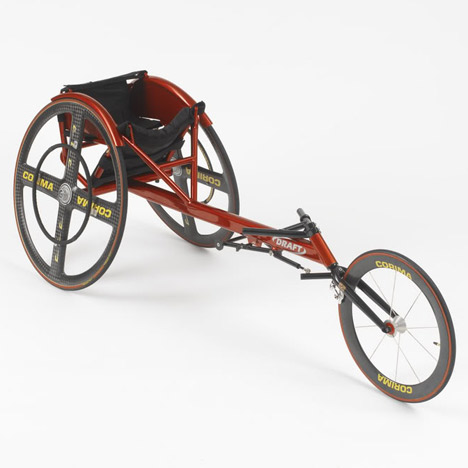 "Everyone has basically the same chair from different brands," he continued. "But we're looking to really help these athletes maximise their performance."

"It's not necessarily a revolution for these guys, but you want to give them every little edge," he added.

To begin with, the design team scanned one of the athletes sitting in his chair. From there, they developed a computerised model that could simulate changes in aerodynamics, and learned that about 50 per cent of aerodynamics cannot be altered as the drag comes from the athlete's body.

They created a frame from carbon fibre that, although similar in weight to a standard aluminium frame, it is significantly stiffer and therefore helps to deter shock absorption.

The stiffness of the carbon fibre also works to keep the wheels straight.

"If you're skiing, when you go parallel, you go fast. If you snow plough, you slow down," said Cracchiola. "We found with very small changes with anything out of alignment, you immediately start seeing speed-scrubbing. Even the smallest bit of alignment matters."

The team also looked to improve the chair's ergonomics, and scanned each US Paralympian so that the chairs can be fully tailored – something Cracchiola says is as much a psychological benefit as it is physical.

Using the measurements, the team will create a form-fitted seat from a mould, and the athletes will also receive custom-made gloves.

"There's an interesting psychology to all of this," he said. "The comfort of your equipment, the repeatability – when you have that mould, you know how it’s going to feel every time. That's one less thing for them to think about."

This year's Paralympic games takes place from 7 August to 18 September in Rio de Janeiro, a month after the Olympic games.

For the London 2012 Paralympics, UK firm Draft created a number of customisable wheelchairs that allowed optimum body positioning, while chairs used in the wheelchair rugby event were designed to withstand heavy impacts and be easily manoeuvrable.