Milan 2016: Indra Nooyi, CEO of giant food-and-drink conglomerate PepsiCo, established an in-house design team three years ago after noticing the brand's products looked the same as everyone else's. At an event in Milan last month she explained the impact it has had – and why she personally attended the design fair (+ transcript).

"I know nothing about design," she said, speaking at a discussion moderated by Dezeen editor-in-chief Marcus Fairs at PepsiCo's Mix It Up installation in Milan.

"I get nuggets of ideas I can take back with me," said Nooyi, adding: "By coming here I'm sending a message to the entire company: that this is so important that I am going to be here to support the design team."

The discussion also included PepsiCo's chief design officer Mauro Porcini and others including designers Fabio Novembre, Benjamin Hubert and Karim Rashid, whose aluminium bottle for Pepsi was exhibited in Milan.

Nooyi said she realised she needed to hire a design team when she asked her senior executives for ideas to help the brand's products stand out in stores. 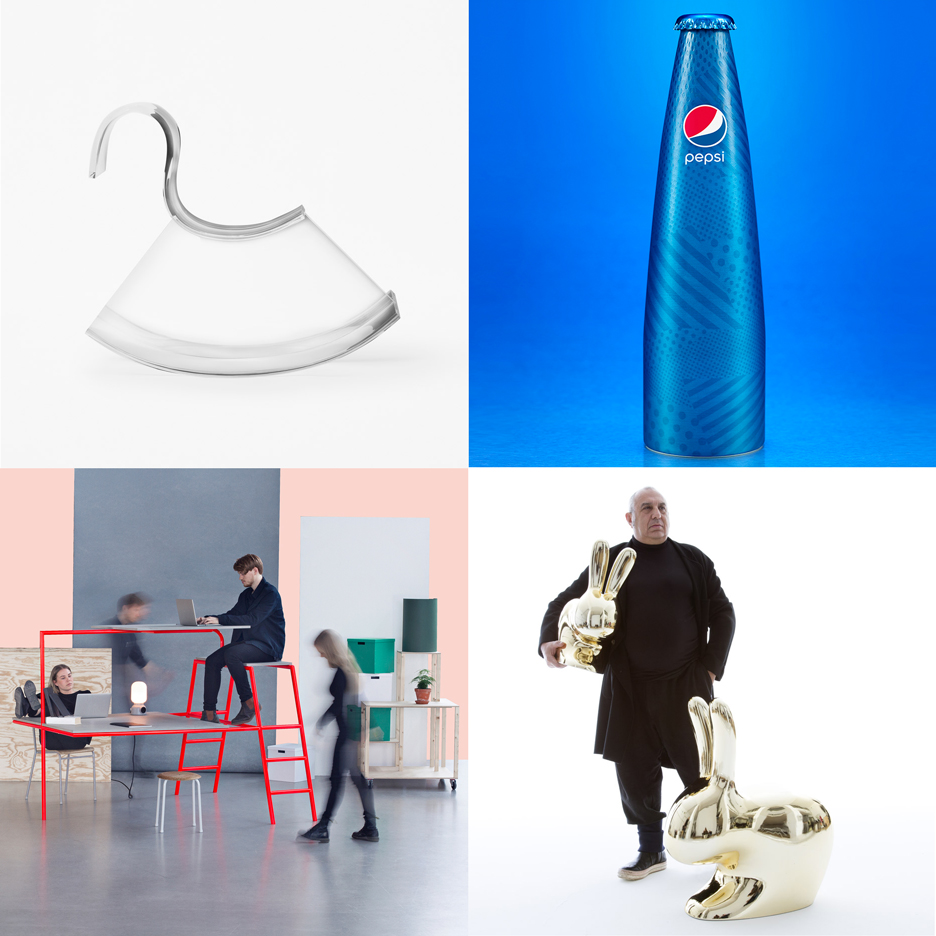 "Every time I talked to our people about redefining what our products looked like on the shelf, they always came back with a new set of colours, literally like putting lipstick on a pig," she recalled.

"We had a dreadful problem in the company: our people didn't really understand what design was."

Under Porcini, PepsiCo's design team have started to transform the company, Nooyi said.

"It's improving the top line and the bottom line, and is building a sustainable pipeline of innovation for the future," she said. "It's allowing us to reframe our business."

Porcini is now hiring 60 more designers to add to the 100 already with the brand.

"We have about 60 positions available in 11 locations around the world, from Shanghai to London, Moscow, Dubai, Mexico City, Sao Paulo and others," Porcini told Dezeen.

"These positions will be located all around the world to first of all generate insights for our global strategies."

Nooyi, a naturalised American, was born in India in 1955. She joined PepsiCo in 1994 and became CEO 10 years ago. In 2014 Fortune magazine named her the third most powerful woman in business.

Below is an edited transcript of Nooyi's comments at the discussion:

Marcus Fairs: Tell us how you came to set up an in-house design team at PepsiCo.

Indra Nooyi: I took over as CEO in 2006. As I was looking at the business and how to grow the business, I realised that at the retail stores, there was enormous clutter. Everybody's products looked the same. There was just a burst of colour on every retail shelf, and there was no way that we could draw the consumer into our products unless we redefined what our products looked like on the shelf.

Every time I talked to our people about redefining what our products looked like on the shelf, they always came back with a new set of colours, literally like putting lipstick on a pig. They'd say: "Why don't you change the yellow colour on the Lay's bag, or change the blue on the Pepsi can?" And I kept saying: "That's not what I'm talking about. I'm talking about how to invite the consumer into the heart of PepsiCo, how can PepsiCo get into the heart of the consumer and emotionally engage them?" But I didn't make any headway.

I said: "Come back to me in three months with the photo album". After three months, half of them never came back to me. Of the other 50 per cent, about half of them had hired a professional designer to take pictures and fill the book. Because they thought that I was looking to be impressed rather than getting to see that they understood design. A few others had their spouses take the pictures.

So I realised that I had a real problem on my hands (and I kept all these albums in my office to remember how far we have come). We had a dreadful problem in the company: our people didn't really understand what design was. I couldn't fire them all and hire a new team so I had to change their heads and their hearts in some way. The only way of doing this was to hire a design team that would come and radically reshape the company.

We had a dreadful problem in the company: our people didn't really understand what design was

Marcus Fairs: Can tell us a little bit about PepsiCo? Because it's big.

Indra Nooyi: It is big. Its revenues are about $63 billion and its market cap is about $160 billion. It operates in about 180 countries, has 22 brands and over $1 billion in retail sales, ranging from treat products to nutritious products like Quaker Oats. PepsiCo is the world's largest food brand: people don't know that. So it's a phenomenal company with a long history. The brand Pepsi itself is only about 20 per cent of the company: it's small. Pepsi has been around for 100 years, PepsiCo has been around for about 51 years. It's a company with a great heritage and a great past, so remaking this company was going to be very difficult.

We brought Mauro in as my first hire to head up the design studio. Mauro brought in the design team three years ago. I told him of the challenge we had, I showed him the albums and what we needed to do to remake the culture.

It's interesting today that the design studio in Soho has tripled in size in the last three years. We now have four or five satellite design studios. I have dinner with the design team at least twice a year, to show them that they are my chosen few. Every time I do a review of the business I have to ask "What did Mauro say about this? What did the design people say?" So they know that if they haven't had design involved, I'm probably going to be cross about it.

The design studio in Soho has tripled in size in the last three years, and we now have four or five satellite studios

Marcus Fairs: What did your peers in business say? Did they think you'd gone mad?

Indra Nooyi: Had I just hired designers for the sake of design they would say I was mad. The first couple of years, they thought I was risking the company's money. Forgetting outsiders, people from within the company thought 'oh here she goes again on some new harebrained strategic idea that's going to go nowhere.'

But today I'd say that design isn't just improving what we're doing. It's improving the top line and the bottom line, and is building a sustainable pipeline of innovation for the future. It's allowing us to reframe our business. People today are clamouring for the attention of Mauro and his team; there's an enormous demand for them.

I wouldn't be surprised to see the design capability double in the next three years again. I think that if you really want to embed design capability and thinking in the company you have to change the culture, and have a critical mass of design people. But you've got to have proof positive that it is driving the top and the bottom line.

Design is building a sustainable pipeline of innovation for the future

Marcus Fairs: You're the CEO of one of the biggest companies in the world. Why are you here at Milan design week?

Indra Nooyi: I think three reasons. One, I'm a student. I know nothing about design; I'm learning as I go along, and I'm hoping that on my visits to Milan – this is my second time at design week – I get nuggets of ideas I can take back with me. Because if not here, where? So that's one of the reasons I come here.

The second is to explicitly support the design team because, as I said, design is a new function at PepsiCo. It's in a better place now than it was when we started but we've got to make sure that we socialise the function of the company so much that it doesn't matter who is CEO.

By coming here I'm sending a message to the entire company: that this is so important that I am going to be here to support the design team.

Then I think that the third reason is that this is also a recruiting location for us. This place is teeming with designers and if those designers get the impression that it is important to the CEO of the company, hopefully they'll come to Mauro and say, 'I want to work at PepsiCo because this is not just a job, I can actually have a life working for PepsiCo because I can make a difference to the company.' So that's why I'm here.