Milan 2016: Italian furniture brand Moroso has unveiled its latest collection of furniture, including a transformable sofa with bean-shaped cushions and a seat based on a dreamcatcher (+ slideshow).

Moroso launched its 2016 range at this year's Salone del Mobile furniture fair, which took place from 12 to 17 April.

Front, which also unveiled a bent-wood rocking horse for Gebrüder Thonet Vienna at the fair, designed a sofa with a series of bean-shaped cushions that form its backrest. 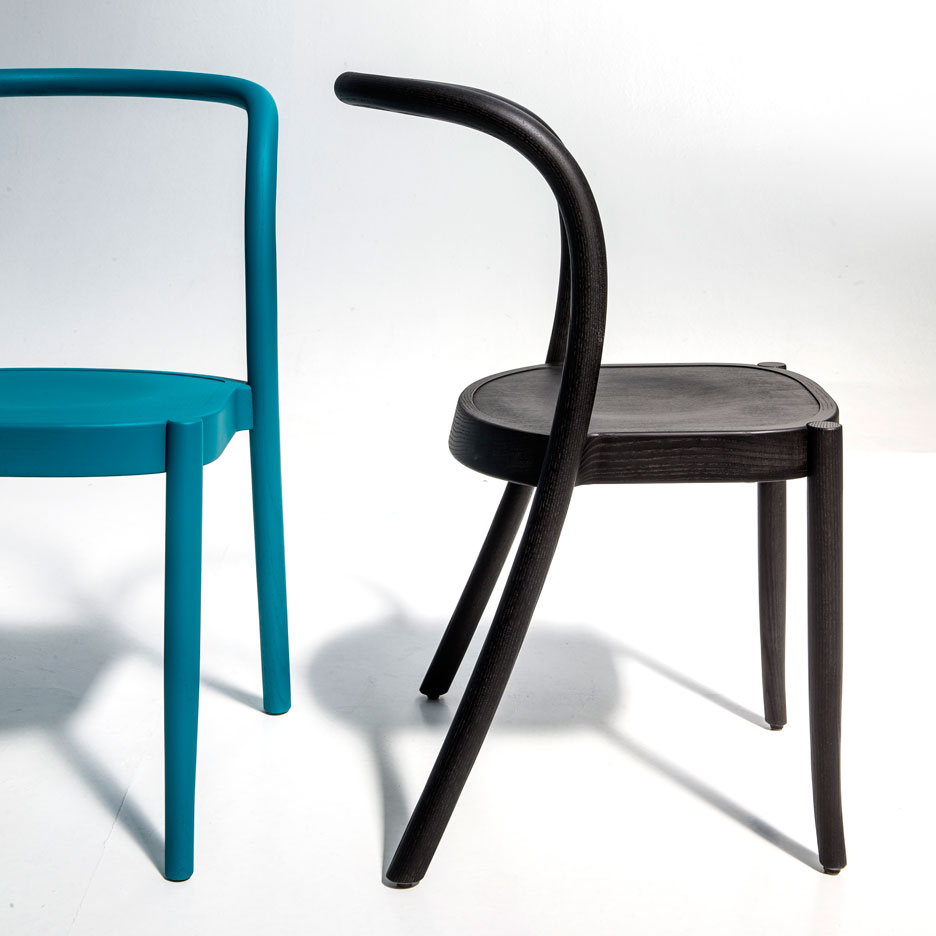 Described by the studio as a "landscape of upholstery", the Triclinium sofa features an attachable side table, and it can also be used as a sofa bed. The woven rope material used to create the cushions makes it suitable for an outdoor daybed.

London designer Tord Boontje designed two pieces for the collection – a chair with a dreamcatcher-like backrest, and bench that was made without any drawings or computers.

"The idea for the Senegal-O chair came from a dreamcatcher that my daughter Evie had made for my birthday," said Boontje. "I liked the pattern and that it could be made with such simple means. I imagined the circle becoming a very large backrest, which would surround you like a halo when you sit against it."

"The Weavers Bench came from a small scale model that I had made, exploring how the surface of the weaving could form a soft shape for the body," he continued. "When I showed this model to Patrizia [Moroso, creative director], she interpreted this as being one large seat."

"When I went to Dakar we made the frame directly from the model and started weaving. This bench was made without drawings or computers, only with skilled hands."

Scholten & Baijings have updated their Ottoman range of daybeds upholstered in a fabric called Blocks and Grid, which they originally designed for New York textiles brand Maharam.

"We designed a textile with a repeat of nine metres, because we worked out that a two- or three-seater sofa needed a nine-metre repeat to not have a repeat [in the pattern] on the sofa," they explained in a movie filmed by Dezeen. "The consumer can get a unique product in a mass-produced textile."

Libeskind's collection of faceted chairs and sofas based on crystals was also presented, along with German designer Sebastian Herkner's seating range made from thick metal tubes.

Edward van Vliet similarly added a Blue Edition to his Sushi Collection, which he says has a more "stately presence" with subtle geometric patterns and hues ranging from cerulean to royal and cobalt blue.

Mermelada Estudio's flatpack Jambo African Chair features a slanted, long backrest, and was inspired by a seat found in a friend's workshop.

"Some time ago we found an African chair in a friend's workshop and it fascinated us," said the studio. "Since then we wanted to use it as an inspiration point for a new design, and finally we did it."

"Our idea was to get inspired by its shape, proportions and construction technique and design a homely armless low chair, with a robust aspect and at the same time with a construction that makes it a flat pack chair," they added.

American designer Marc Thorpe's Baobab table is based on a tree with the same name that is found throughout Africa. It features a colourful woven base, and a flat black-coloured top.

London studio Doshi Levien designed a sculptural seating collection named Armada with arms that billow out from the seat like wind-filled sails.

During an interview with Dezeen, the studio's founders Nipa Doshi and Jonathan Levien claimed that Moroso was one of the few furniture companies in Italy that would "dare" to invest in their work.

"I felt Patrizia Moroso was the one person in Italy who would understand our approach, who would be open to it," said Doshi. "She's very interested in mixing things together, making connections where traditional manufactures in Italy would not even dare go."

During this year's Milan design week, Moroso also transformed its Milan showroom into an exhibition space filled with products by Ron Arad, marking a longstanding relationship between the Italian company and the Israeli designer.