Architects Matthew Butcher, Kieran Wardle and Owain Williams have built a factory-inspired mobile structure that will travel along Hadrian's Wall in northern England to provide a temporary residency for writers (+ slideshow).

The unusual structure consists of a streel frame clad in panels of translucent polycarbonate, and features a dysfunctional chimney stack and a set of fin-like shutters – all references to the region's industrial architecture.

It is set to travel to several archaeological locations along Hadrian's Wall, a crumbling fortress that once marked the northern border of the Roman empire.

London-based architects Butcher, Wardle and Williams named the structure The Mansio, after the roadside teahouses and meeting spots constructed along Roman roads. They describe it as a "mobile ruin". 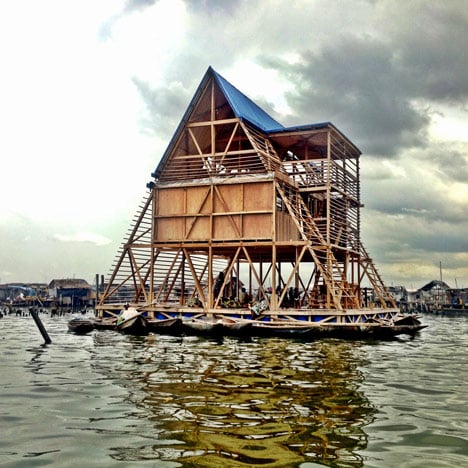 "There are two main references for the structure. The first are the industrial architectures seen in the northeast and northwest of England, both operational and in ruin," Butcher told Dezeen.

"These architectures and environments are what The Mansio will be travelling through, and past, as it moves from destination to destination along Hadrian's wall."

"The second is the idea of a structure as a signpost or marker in the landscape, one that can be seen from a distance," he added. "In this way it is intended to function in a similar way to how a Roman fort stationed on the wall might."

The Mansio will host a range of events run by local arts bodies Hexham Book Festival and Arts&Heritage over its six-month journey, including performances of commissioned pieces by ten writers.

"The rich history of Hadrian's Wall and its peoples provide a creative foundation for the authors involved in The Mansio project, writing new responses to the ever-present issue of borders and colonisation and the unique history of this ancient Roman landscape," said director of Hexham Book Festival Susie Troup.

The project launched in South Shields earlier this month and will follow a route along Hadrian's Wall, taking in archaeological sites that include the Roman forts of Arbeia, Birdoswald, Senhouse and Carlisle Castle until September 2016.

Butcher, Wardle and William won a contest to design the structure, seeing off competition from studios including FleaFolly Architects, Sean Griffith's Modern Architecture and NEON.

Butcher, who is founder of Postworks studio, recently designed a floating weather station to monitor Essex's flood-prone Thames Estuary. The temporary structure, which collects information about tide fluctuations in the seasonally flooded landscape of southern England, is intended as a critique on the current trend for floating architecture.