Colorado studio Land Ark has unveiled a metal-clad, mobile dwelling that is meant to serve as a "comfortable backyard office or guest room".

The movable home contains a sleeping area and a combined zone for lounging, dining, cooking and working.

"We wanted to create a comfortable backyard office or guest room that requires less space to park, is less intimidating to haul, and overall is less concerned with trying to match the amenities found inside a typical house," Land Ark told Dezeen.

The Quatro has similar traits but is considerably smaller at 192 square feet (18 square metres).

Rectangular in plan, the unit has angled walls and a sloped roof, which lend a sculptural look. Facades are clad in corrugated steel and feature windows of varying sizes.

In the kitchen, the designers incorporated an electric cooktop, a convection oven that doubles as a microwave, a yacht refrigerator and a dishwasher.

To provide more sleeping space, the team created a dinette that converts into a single bed, with the back seat cushions becoming the mattress.

Built into one side is a cubbie with a reading light, USB outlet and space for storing typical nightstand items.

A slender hallway leads to a bathroom with a toilet and shower. A vanity lies just across the corridor.

"The pivoting bathroom door latches across the hallway to connect the spaces and offer full privacy from the living/kitchen area," the team said.

As one passes into the bedroom, the ceiling right rises to over 9 feet (2.7 metres). Cove lighting accentuates the ceiling height and helps the space feel "surprisingly cavernous," the design studio said.

The bedroom is fitted with a queen-sized Murphy bed that enables the room to be opened up when not in use.

Interior finishes include vinyl plank flooring and walls and ceilings made of white-washed pine with a tongue-and-groove assembly. Cabinetry is fabricated of Baltic birch with a white laminate veneer.

The Quatro trailer's frame is made of cold-rolled steel with a 3.5-inch (8.9-centimetre) cavity.

To help provide an air-tight envelope, the gap is stuffed with closed-cell, spray insulation, in addition to a layer of rigid insulation outside of the frame.

The unit comes with a rooftop heater/air conditioner and hookups for sewer, water and power. The unit can be hitched to a three-quarter ton truck.

Before moving to Colorado, the couple lived in Texas, where Brian studied architecture, and Joni studied management and marketing.

In 2011, they decided to purchase a small, mobile dwelling to live in, but were unable to find a suitable option on the market. So they built their own.

Their initial prototype, Woody, was completed in 2012 and resembles the models they now sell. The couple has lived in the caravan, testing its functionality and making changes as needed. 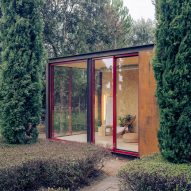 The Buzardes said that their homes, while mobile, tend to remain stationary. The Quatro marks their shift toward more agile homes.

"While this unit is still intended to remain stationary most of the time, it represents us beginning to move in that direction," they said.

"Looking ahead, we're designing and developing a unit that is intended to function as a road warrior with robust off-grid/self-sufficient systems."

Other mobile homes include the Escape One XL, which features two levels, a charred wood exterior and interior sleeping space for up to eight people.

The photography is by Land Ark.