Set back from the beach behind a row of houses, this Mexican villa by architect BAAQ has terraces and a swimming pool raised up so residents can relax outdoors with a view of the ocean (photos by Edmund Sumner + slideshow).

The first six houses front the beach, so all have fairly straightforward designs. But the two rear houses behind proved more challenging, as they don't benefit from the same ocean views.

Because of this, the owner decided to abandon his original designs and instead asked Quiñones to develop a new template.

"It was necessary a new design that considered the particular issues of this site," explained Baaq. 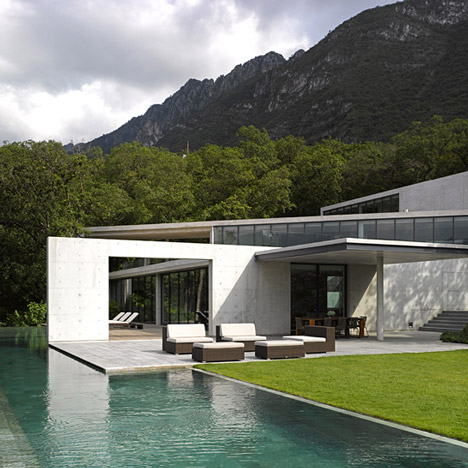 Tadao Ando's Casa Monterrey nestles against a hillside in Mexico

Making use of existing foundations, which had already been installed, Quiñones designed a two-storey house with bedrooms on the lower level and living spaces above.

But he also raised up a series of patios and a swimming pool, meaning residents can enjoy the same outdoor lifestyle as their neighbours without compromising their views.

The building has an L-shaped plan, wrapping around the terraces and swimming pool.

Concrete provides the framework for all of these structures, with the terraces supported by curved columns and the pool contained in what Baaq calls a "concrete cube".

The north- and west-facing walls are painted white, and infilled with handmade, perforated tiles. These provide decoration, but also allow the sea breeze to flow through the living spaces.

"The wall also gives privacy, blocking the view from the common areas and paths of the community to the social area, and enhances the view towards the ocean," said Baaq.

"This gesture gives the project contrasting types of facade, one totally opened and the other totally closed."

For the building's roof, Quiñones chose to use the same technique he used on another recent project – a house he collaborated on with Japanese architect Tadao Ando, called Casa Wabi.

It has a wooden frame and is covered with layers of dried palm leaves, commonly used in the region because they provide shelter while also allowing natural ventilation. Buildings with these types of roof are known locally as Palapa.

It shelters a lounge area, dining space and kitchen, which are loosely divided up by the positions of columns.

Palm stems were used to create louvred walls for a first-floor studio, raised up on a platform next to the swimming pool.

"Considering that the studio is the only element above ground aside from the Palapa, it was designed as a cube but made of palm bones, giving a more light sensation and freshness," said the team.

Images are by British photographer Edmund Sumner, who also recently shot a cloud-inspired nursery by Junya Ishigami and a house of stacked volumes in India.