Milan 2016: Gebrüder Thonet Vienna's trademark steam-bent wood features in this modular wall hanging designed by Danish design duo GamFratesi and based on the movements of dancers.

The hanger is made from several pieces of looped wood that can be joined together to make longer or shorter fittings as needed.

The loops are created by steaming and bending rounded lengths of wood, which set into place as they cool. Upward-facing loops can be used for coats, while umbrellas or scarves can be hooked around the downward sections.

Its shape is based on the "lightness of the steps" of the ballroom dance it takes its name from, which involves couples travelling around a dance floor in a series of circular movements. 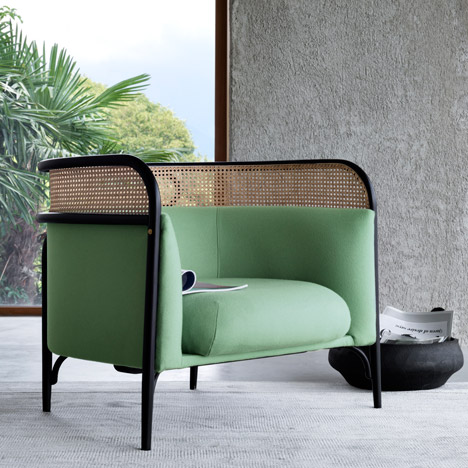 "The repeated sinuous rotations of the dance are the inspiration behind the concept and shape of the piece," said the company, which previously collaborated with GamFratesi on a set of cane-panelled furniture.

"It reproduces the ideal line traced by the willowy movements of two dancers spinning incessantly to the sound of music, tracing the profile of the waltz on the dance floor," it added.

Owners can also create new hanging points by adding wooden knobs to the top of each curve.

The hanger is just one of several new pieces created for Gebrüder Thonet Vienna's 2016 collection, which includes a minimal rocking horse designed by Stockholm studio Front. Industrial designer Nathan Yong has also contribute a coathanger that doubles as a clothes and footwear stand.

The collection was launched during Milan design week in April. GamFratesi founders Stine Gam and Enrico Fratesi unveiled several other new pieces at the event.

These included a mid-century-style chair and desk to mark Porro's 90th anniversary, and a range of sculptural bathroom taps for Axor, both on show at the Salone del Mobile furniture fair. The pair also created spinning carpet-covered podiums for an exhibition of Danish design.