Dezeen promotion: Patrick Norguet and Odo Fioravanti are among the designers who have contributed pieces to Italian brand Pedrali's latest furniture collection, which was unveiled during this year's Milan design week (+ slideshow).

French designer Patrick Norguet has contributed a collection of upholstered armchairs. The chairs feature a gap between the backrest and seat that allows for easy handling. Their solid ash legs can be stained either grey or black, and the shell can be upholstered in fabric or leather.

Italy-based Odo Fioravanti named his Dome seating collection after the architectural feature of city monuments, which the chairs were designed to reference.

Formed of polypropylene reinforced by glass fibres, the chairs were designed to look like bistro seating. They are available in two styles, with one featuring a perforated shell. The chairs can be stacked and are available both with or without armrests, in a range of colours including white, beige, yellow and red. 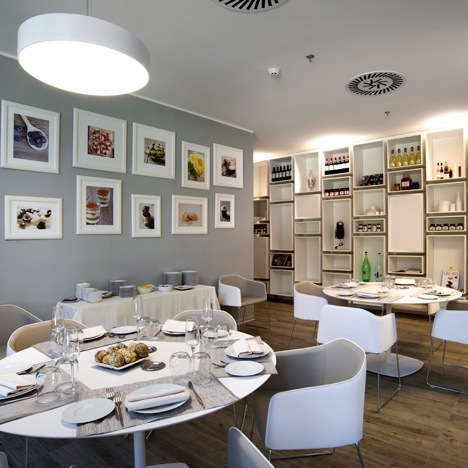 Pio and Tito Toso, who are also based in Italy, designed their Lunar table collection to look like the skeleton of a solid shape.

"Lunar has been conceived as a solid geometrical shape from which the material has been removed to design an essential and light table," said Pio and Tito Toso.

Four steel rods support the base at each corner, and slant to meet together and support the tabletop. The base can be combined with tops of different sizes and finishes. The tables are also available in a variety of heights.

Wooden armrests attach to the frame for the armchair design. The collection also includes stools, which are available in two different heights and have a low backrest.

A video showing the making of the Pedrali New Ideas magazine