For those who aren't able to visit BIG's Serpentine Gallery Pavilion this summer, Swiss visualisation studio Archilogic has made it possible to take an unofficial tour of the building using virtual reality (+ interactive 3D model).

Ahead of the pavilion's unveiling tomorrow, Archilogic has created an unofficial digital model that allows users to preview the building using VR devices like Oculus Rift or Google Cardboard, or as an interactive 3D model in a web browser.

Wearing a VR headset, users are able to recreate the experience of walking through the pavilion – conceived by BIG founder Bjarke Ingels as an "unzipped wall" in London's Kensington Gardens. 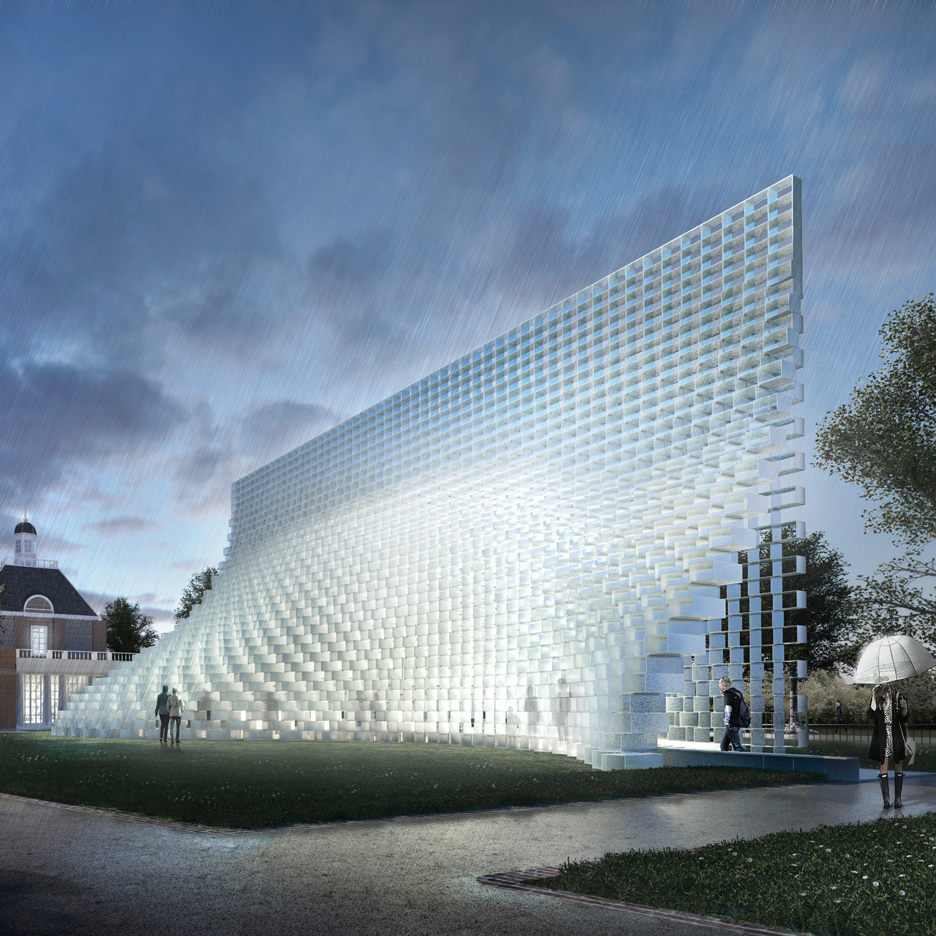 "Unless you're in London, you may not get the opportunity to visit the pavilion physically, but thanks to the web we can take you there virtually," explained software engineer Benjamin Devine, who worked on the project.

When viewing the model in a web browser, users are also offered the opportunity to edit the design and create their own versions of the fibreglass brick structure.

By moving the bricks in different directions or changing their size, an infinite number of designs can be created.

"We thought it would be interesting to let people manipulate the pavilion," Devine told Dezeen.

"Because we're doing everything in the browser, we can share these explorations in a public virtual space for anyone with a recent device and an internet connection," he explained.

This interface allows users to edit the pavilion

Bjarke Ingels was named as the designer of the 16th Serpentine Gallery Pavilion back in February, and revealed his design just two weeks later.

It comprises a series of box-like fibreglass frames stacked on top of each other, in a pattern based on a common brick wall. The wall splits to create curved entrances at both ends of the pavilion, as well as a hollow centre.

Archilogic built a digital version of this structure this using a custom-built software programme, with textures and landscaping details imported from graphics programs including Photoshop and Blender.

Here are some examples of possible edits

"We modelled the pavilion following simple rules: starting with a brick, reusing the brick to create a wall, 'unzipping' the wall so that its base follows a curve," said Archilogic.

"Building a model by defining rules allows us to change the components of the wall, the height of the bricks, the shape of the curve, in the end generating a new unique Serpentine pavilion without tediously remodelling everything."

Archilogic's Zurich-based team is made up of architects and engineers, and the team regularly creates digital models to test their software editing skills. This project is the latest in this series – so wasn't commissioned by the Serpentine Galleries or the pavilion team.

To view the models in virtual reality, users simply load the webpage on their device and hit the 3D button.

BIG's Serpentine Gallery Pavilion is officially unveiled tomorrow and opens to the public later this week. It will be accompanied by four summer houses by Kunlé Adeyemi, Barkow Leibinger, Yona Friedman and Asif Khan.

Dezeen has been looking back at each of the Serpentine Gallery's pavilions from 2000 to 2015 in a series of interviews with gallery director Julia Peyton-Jones.