The structures are intended to reference the 18th-century Neoclassical summerhouse – named Queen Caroline's Temple – that is also located in Kensington Gardens.

Adeyemi of NLÉ has created an inverse replica of the folly, which will be constructed from prefabricated building blocks assembled from sandstone. The architect intends the Temple to fulfil the primary purpose of a summerhouse as a space for shelter and relaxation. 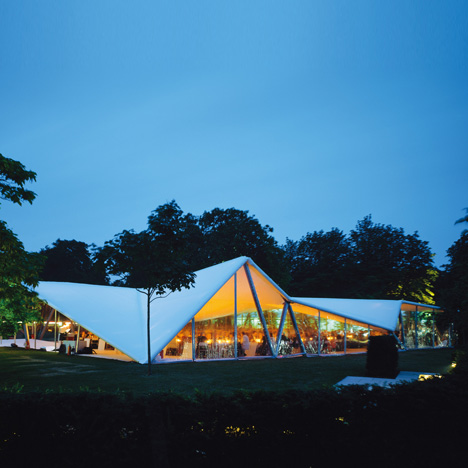 "The carved-out void, soft interior and fragmented furniture blocks create comfortable spaces for people to eat, rest or play – in and around the house – all through the summer season," said Adeyemi.

Asif Khan has drawn on the Temple's location close to the water and the way it catches sunlight reflected off the Serpentine lake for his design. His summerhouse features a polished metal platform and roof, surrounded the undulating timber staves. Stepping stones mark the entrance to Khan's structure.

Barkow Leibinger has based its design on a second 18th-century building that once rotated on top of an artificial hill to offer panoramic views of the Royal Park but was later demolished.

"With this absent structure in mind, we have designed a summerhouse in-the-round," said the architects. "Standing free with all its sides visible, and conceived as a series of undulating structural bands, it is reminiscent of a blind contour drawing (a drawing executed without lifting the pencil up from the paper and only looking at the subject)."

Finally, Yona Friedman has designed a structure based on his La Villa Spatiale project, which the architect has been working on since the 1950s. This proposes using mobile and modular architecture to allow cities to grow without needing lots of land and to help people create their own house designs.

"The Serpentine Summer House is a 'space-chain' structure that constitutes a fragment of a larger grid structure, originally conceived for La Ville Spatiale," said Friedman. "It is a modular structure that can be disassembled and assembled in different formations and compositions."

All of the structures will be built on sites close to the main pavilion, which will occupy the lawn in front of the Serpentine Gallery.

The pavilion design by Bjarke Ingels is based on the idea of an "unzipped wall" and will be made of stacked fibreglass boxes.

"The response to design a Summer House inspired by the 18th-century Queen Caroline’s Temple by our four international architects has been equally inspired and has produced four unique spaces for visitors to explore this summer," said gallery directors Julia Peyton-Jones and Hans Ulrich Obrist.

Dezeen has been looking back at each of the Serpentine Gallery's pavilions from 2000 to 2015 in a series of interviews with Julia Peyton-Jones.