Venice Architecture Biennale 2016: an "unbreakable glass ceiling" is pushing talented architects out of Sweden and Norway, according to this year's curators of the Nordic Pavilion in Venice (+ slideshow).

According to David Basulto and James Taylor-Foster, the architectural heritage of these two countries is constraining the newest generation of designers.

They claim that 20th-century architects, such as Gunnar Asplund, Sverre Fehn and Alvar Aalto, have created such an established Nordic aesthetic that young architects are struggling to establish their own identities. Many are instead choosing to leave their home countries and work abroad.

Nordic architecture is "on the verge of stagnation", Basulto told Dezeen during a press tour of the Nordic Pavilion, which opened a fortnight ago as part of the Venice Architecture Biennale 2016.

"The weight and gravity of certain architectural figures have created an idea of what Nordic architecture is, which is quite stifling," added Taylor-Foster. "You see it in education and you see it in practice."

"It's an unbreakable glass ceiling, and what you eventually find at the end of the day is that these young architects leave the country," he said.

"Some of the most interesting emerging architects from Sweden and Norway – not so much Finland – are in other European countries, simply because they gave up trying to break through."

Scandinavian and Nordic design became particularly influential during the 1950s and 60s, with the emergence of a Modernist aesthetic that combined minimal structures with simple interiors and raw materials.

The Nordic Pavilion – which is located at one of the two main Venice Biennale venues, the Giardini – is a typical example of this style, with a raw concrete structure and a roof canopy of slender struts. It was designed by Sverre Fehn in 1959.

Basulto and Taylor-Foster were invited to curate the pavilion's Biennale exhibition, even though neither of them are from Nordic countries.

Based in Chile, curator Basulto is co-founder and editor-in-chief of architecture website ArchDaily, while UK-based assistant curator Taylor-Foster is the site's European editor-at-large.

Their Biennale exhibition is billed as a contemporary survey of Nordic architecture, showcasing 300 projects completed in Sweden, Norway or Finland in the last seven years. The pair felt this would give architects an opportunity to reflect on the current situation.

They named the exhibition In Therapy to emphasise their goal – to encourage discussion and change in these nations. 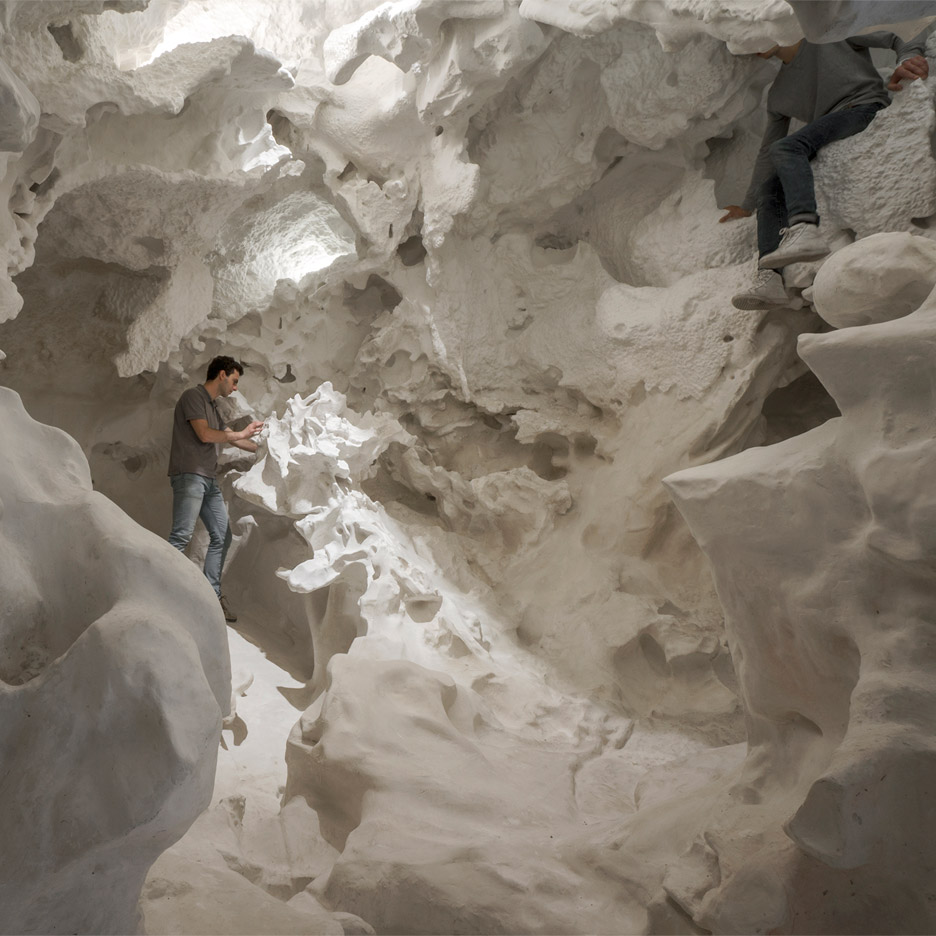 "As foreign curators, with an observational standpoint, we have been able to place [the Nordic countries] in therapy and perhaps ruffle some feathers," said Taylor-Foster.

The centrepiece of the exhibition is a wooden pyramid that forms a display stand for all 300 projects on show. This structure masks the tree trunks at the heart of the pavilion, and also allows visitors to climb up and touch the roof.

According to Taylor-Foster, part of this roof collapsed just before the Biennale was due to start dur to heavy rain and required serious repairs.

He said the pavilion is so fragile that curators are banned from hanging anything from the walls or ceiling.

"The ceiling looks strong but it's actually really fragile, because the humidity in Venice has caused the rebar to corrode over time," he told Dezeen.

"This building is at a real risk of losing its purpose. At the same time, this building is so important that I don't think it will ever be demolished."

Taylor-Foster sees the building as a metaphor for the issues in Sweden and Norway.

"The great challenges that we faced as curators of this pavilion represent some of the same issues that emerging architects face in these countries," he added.

The Nordic Pavilion is open until 27 November 2016 as part of the Venice Architecture Biennale.

Other highlights here include a cavernous cloud-like structure in the Swiss Pavilion and a swimming pool inside the Australian Pavilion.

More from the Venice Biennale 2016