LP2 Architecture Studio has used rotating panels and recessed openings to create flexible spaces for this office block in Tehran, where contemporary architecture is experiencing a boom (+ slideshow).

LP2 architect Mohsen Kazemianfard designed the seven-storey-high building for Saadat Abad, a neighbourhood in the northwest of the Iranian capital that is becoming more and more densely populated.

His aim was to use the building's two faces – north and south – to reveal its different uses, as well as to make comfortable internal conditions for occupants.

"This project shifts from a basic relationship between the building and the city to an interaction between the inside and outside," said the architect. "This building intends to create a connection with the exterior observers."

The south facade, which fronts a small local park, is the more elaborate of the two.

A broad staircase leads up to the entrance, negotiating the change of level between the two sides of the site. It arrives at a large glazed wall that fronts the two-level shop unit, above the subterranean parking and storage levels.

Above, the wall starts to break down into a series of smaller rectilinear volumes that frame recessed balconies for the five office floors. These vary in size, and some overlap each other.

"The park had a great role in forming the concept of the southern facade," explained Kazemianfard. "Some parts of the facade have been pushed inside to open a perfect view of the park for the users of the building." 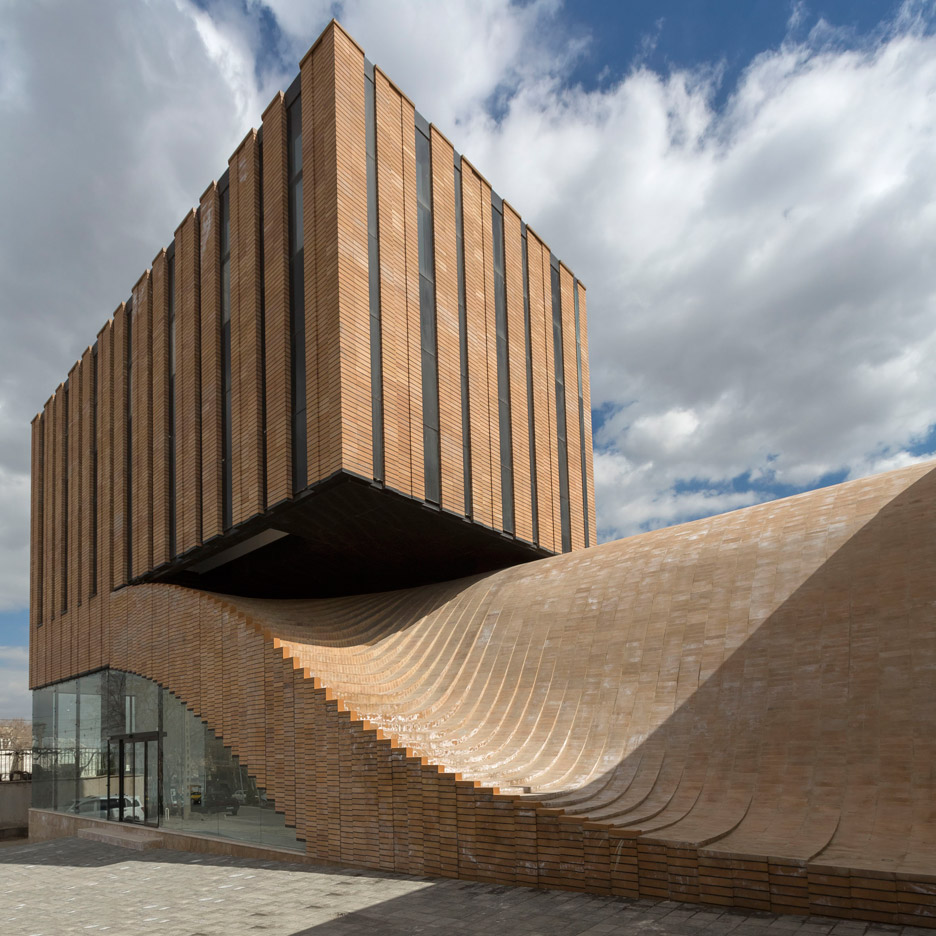 All five upper floors are flanked by wooden louvres that also extend across the windows, helping to provide relief from the harsh midday sun.

The architect describes the effect as a "calm and varying urban facade" that "enhances the quality of the interior spaces".

The north facade is much simpler, with the basement floors concealed and a glazed shop front at ground level.

The majority of this elevation is also clad with wood, but many of the panels here can be rotated. Occupants can use these boards to shut out the light completely, or to direct it towards to different sides of a room.

"The wooden surfaces of the northern facade could be described as the dialogue between the users and the city," said Kazemianfard. "These surfaces could change into thousands of forms."

Wooden finishes continue inside the building, creating a relationship between inside and outside, and are paired with simple white-painted walls and ceilings.

Iran is "on the verge of a new era for architecture" according to local architects, as change sweeps through the Islamic republic following the lifting of crippling economic sanctions.

The Saadat Abad Office Building was completed in 2015. It follows several other interesting new projects in Tehran, including the country's largest pedestrian bridge and an apartment block with pigeonhole-style windows.