Iran is "on the verge of a new era for architecture" according to local architects, as change sweeps through the Islamic republic following the lifting of crippling economic sanctions (+ slideshow).

An expanding economy, growing demand for contemporary lifestyles and booming investment in tourist infrastructure are combining to create new opportunities for professionals in the once isolated nation.

"Iran is opening its doors to the world," Reza Mafakher of Iran-based firm Xema architects told Dezeen, citing the election of reformist president Hassan Rouhani in 2013 and the lifting of international sanctions in 2016 as key drivers of change.

After that, "the projects referred to our firm were different both in terms of scale and function," Mafakher said.

"This represents the beginning of a boom in the industry," he added. "We believe that we are on the verge of a new era for Iran and its architecture."

The emerging contemporary architecture scene in Iran is evident in several recent projects, including the new 270-metre-long Tabiat Bridge, which was designed by Iranian architect Leila Araghian when she was just 26 years old.

The project is Iran's largest pedestrian bridge and is located in a northern area of Tehran known as Abbas Abad – an area originally earmarked as a residential zone for the military, that has since been populated with libraries and museums. 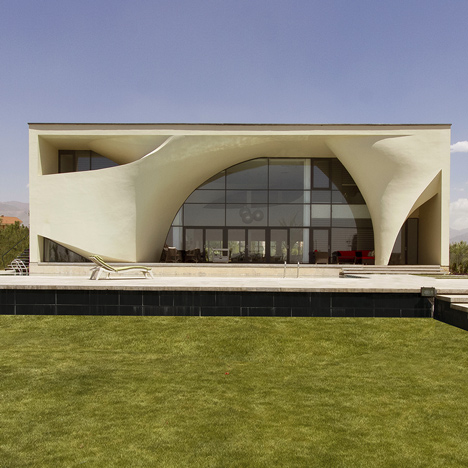 Next Office covers house near Tehran in a curved concrete facade

Tabiat Bridge is one of three Iranian developments – more than any other nation – shortlisted for this year's Aga Khan Award. The award, which comes with a prize of $1 million (£700,000), acknowledges excellent architecture and infrastructure design that responds to the needs and aspirations of societies where Muslims have a significant presence.

Such architectural achievements are a far cry from Iran's recent past, which was mired by a lengthy war with Iraq in the 80s.

"Construction after the war between Iran and Iraq was more user/shelter based and in terms of architecture and art, indefensible," explained Mafakher. "Hence the rupture in architecture and construction in Iran can be seen greatly between 1980 and 2000."

"In the past decade however, the architecture has found its direction again," he said.

Numerous residential projects, as well as a small cafe in Tehran that was designed to promote the congregation of people in spaces previously heavily guarded by police, highlight the changes taking place in the country.

"I believe for anyone living outside Iran it is normal to sit along the sidewalk and drink coffee, but there are many social and political factors that make this almost impossible in Tehran," architect Ghaemmaghami told Dezeen last November. "By designing the cafe we tried to bring people out of the closed interior to the street."

The emergence of a young, highly educated and increasingly connected generation is the driving force behind many of the new projects, according to architect Alireza Taghaboni of Iranian studio Next Office.

"The young generation are working, they are penetrating the economy and business," said Taghaboni. "They want modern, new things and a higher quality of life, so they design better projects."

Iranians are backing reformist policies in their quest for a higher quality of life, which helped secure Hassan Rouhani's election as president in 2013. One of Rouhani's main election pledges at the time was to ease the crippling economic sanctions placed on Iran by the international community.

In July last year, world powers hammered out a deal with Rouhani's administration, which promised to scale back Iran's nuclear programme in exchange for lifting the sanctions.

This move, according to Mafakher, promises to accelerate the architectural changes in the country by boosting outside investment.

"In recent years, due to the blocked transactions between Iran and other countries, no investment emerged," he told Dezeen. "After the agreement the presence of foreign investors – especially in the construction of hotels and tourist entertainment centres – has increased dramatically."

These investors are hoping to cash in as the number of tourists heading to Iran looks set to dramatically increase following the thawing of political relations with the west.

Masoud Soltanifar, vice president of Iran, has said that the Islamic republic is preparing for a "tsunami" of tourists in the coming years, and unveiled a package of measures designed to further boost numbers including the construction of hundreds of four and five star hotels.

Increasing investment, a growing economy and more wealth in the hands of the Iranian people is fuelling new residential projects as well as hotels and infrastructure. Next Office created a private house in Tehran with rotating rooms on its facade, allowing its residents to open up rooms in the summer, or turn them inwards during winter.

In cities, where space is at a premium, apartment blocks are springing up to meet the high demand for new living spaces, like the six-storey Andarzgoo Residential Building in Tehran by Ayeneh Office, which features a facade of ridged granite and slatted timber shutters.

But despite the accolades and renewed interest from overseas, the development of high-quality architecture in Iran still faces an uphill battle against build-it-fast, build-it-cheap developers, according to Ali Dehgani of Ayeneh Office.

"Iran has a rich architectural heritage but unfortunately the contemporary architecture of Iran is chaos," said Dehghani. "Most of the buildings are often built by people who don't value the quality of space."

Tehran-based architect Taghaboni says there is friction between some of the emerging clients, who simply want to make money, and architects attempting to enhance lives with innovative architecture.

"Building and selling apartments is a very high-profit business, and in this market doing intellectual things isn't always important for the clients," said Taghaboni. "If you walk into the streets of Tehran you can see many examples of kitsch architecture that are for the new high classes in the country."

"One of our challenges is fighting with the kitsch," he added.

Some architects also believe Iran is losing its architectural traditions as pressure mounts in cities to create more housing. In response, they are finding ways to incorporate and reinterpret traditional features in new developments.

Brothers Nima and Sina Keivani of Keivani Architects based the design of their seven-storey apartment block in Tehran on elements commonly found in traditional Iranian architecture. This includes a reinterpretation of the orsi window, a type of sash window with latticed woodwork and coloured glass typically used to help reduce sunlight and heat, and repel insects in the hot climate.

Architects Sara Kalantary and Reza Sayadian of TDC Office included deep balconies with modular flower boxes on the rear facade of their Saba Apartment block, to reconnect residents with the Iranian tradition of urban gardens.

"This project was the result of our efforts in revitalising this lost heritage and giving a new interpretation to the old concept," they told Dezeen.

Other challenges faced by architects on a day-to-day basis include the "severe filtering" of information, a shortage of modern technology in construction, traditional building codes and expensive land values in big cities, says Mafakher of Xema Architects.

There has been an increased awareness in the west of these issues and what Iran has to offer architecturally, largely due to the lifting of economic sanctions. But a lack of wider media interest in issues beyond Iran's political situation has, according to some architects, led to a situation where many of the country's achievements have been overlooked.

"The USSR – the Communist Russian regime – had very good movements in art, such as the Constructivists, but the western media blocked them," said Taghaboni. "I think in a similar way Iranian artists have suffered something like this."

"Iran is mysterious at the moment because of the blank of news and lack of communication," he continued. "But now I think there is a very high demand to know what is going on in Iran. This can help us."

Mosha House, designed by New Wave Architecture for the rural village of Mosha, Tehran, is one recent example of a housing project that has attracted international attention through architecture publications like Dezeen. It comprises a trio of irregularly stacked boxes, each angled towards a different view of the mountainous landscape beyond.

The Termeh building, housing offices and retail with undulating brick roof that visitors can walk on, has also reached a wide audience after being published online. This attention is encouraging more young firms to publicise their work.

"Now there are young firms with a desire for globalisation developing Iranian architecture again," said Ali Dehghani. "We hope that young offices such as ours will create a future of architectural excellence."