A Globe-inspired theatre in northern France has been vandalised a week before its opening, an act the architect believes was "politically motivated desecration" by members of the far right.

Vandals spray painted phrases like "Irresponsible Politicians – Shame", "How much?" and "Debt" onto the exterior of the round, wooden theatre, designed by Paris-based Studio Andrew Todd.

It is built on the same grounds as a cultural centre dedicated to Anglo-French cooperation. The graffiti, painted in bright orange, questioned its commissioning and cost.

In response, the studio founder, British architect Andrew Todd, released a statement condemning the vandalism and linking it to the "febrile atmosphere preceding the British EU referendum, in which Europe's far-right parties are attempting to stoke trouble".

"I deplore in the strongest possible terms the politically motivated desecration of my architectural practice's neo-Shakespearean theatre in northern France, a few days before its official inauguration," Todd said.

"This was not the act of a bunch of teenage malcontents; it was a well-organised, adult, carefully executed stunt relaying through violence the messages expressed already in the political sphere by the extreme right."

He connected the acts to the murder of Labour MP Joe Cox, who was shot and stabbed multiple times following a constituency meeting in Birstall, West Yorkshire last Thursday. 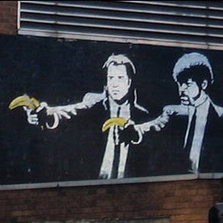 "In my home country this same toxic mood has resulted last week in the assassination of a wonderful, inspiring member of parliament," he said.

Todd's theatre is located in the grounds of the castle Chateau d'Hardelot, the gate columns of which were also vandalised. Since 2007 the chateau has been home to the Centre Culturel de l'Entente Cordial, which is dedicated to strengthening cultural ties between France and Britain.

The grounds sit 48 kilometres south of Calais, in a region that has some of the highest numbers of supporters of France's far-right National Front.

The theatre was commissioned by the Socialist-run local government of Pas-de-Calais with a budget of €6 million (£4.6 million) and came under fire from critics who said it was a waste of money. Todd estimated the final cost at €4.3 million (£3.3 million).

Featuring a 388-seat auditorium and a standing pit, the building will be France's first that is designed in the style of the Globe Theatre – a playhouse associated with William Shakespeare that features both seating and standing sections, to accommodate a cross section of society.

"The Shakespearean theatre – of which this building is an example – is the absolute opposite of top-down, elitist culture: it is a form which welcomes, which invites participation, which opens the experience and expression of culture to the widest possible range of citizens."

The original Globe theatre was destroyed in a fire in 1613. A modern reconstruction called Shakespeare's Globe opened in 1997 in the London Borough of Southwark.

To mimic the rounded shape of the building, Studio Andrew Todd's design is formed from a cylinder of cross-laminated timber – an engineered wood consisting of laminated timber sections. It is the first building to be made entirely from curved sections of the processed wood.

The core is a surrounded by a cage of 12-metre-high bamboo poles. The building is designed to be completely naturally ventilated, in order to keep the running of the theatre low cost.

"Unlike many palaces of culture, it is possible to put on a show in this building literally with nothing, using only natural light and natural ventilation, the breath of the surrounding forest," said the architect.

Britain's EU referendum will take place this Thursday. The upcoming vote has led a host of architects to publicly state their opinions. Heatherwick, Chipperfield and Adjaye are among high-profile architects and designers opposing Brexit, while Rem Koolhaas has said that Brexit campaigners are fighting for an England that doesn't exist.