Dutch firm MVRDV has revealed its designs for a library with an eye-shaped atrium, which is nearing completion in Tianjin, China (+ slideshow).

The Tianjin Binhai Library will encompass 34,200 square metres of total floor space. It will have a rectilinear body, but at its centre will be an oval-shaped atrium with a spherical, mirrored auditorium.

MVRDV designed this space to look like an eye when viewed through the building's glazed walls.

Library books will be located in terraced shelves that look like the contours of a topographical landscape. They will wind up and around the oval-shaped atrium and continue around the building, doubling up as louvres to restrict daylight coming in through the glass facades.

At the centre of the space, the spherical auditorium will reflect the interiors, as well as the park outside.

"The Eye is the centre of the library," said MVRDV co-founder Winy Maas. "It hollows out the building and creates, out of bookshelves, an environment to sit, to read, to hang out, to climb and to access, to create an organic social space."

"In its heart is the auditorium which mirrors the environment, giving a 360-degree panorama of the space inside; a truly reflective and pensive environment."

The Rotterdam-based studio designed the library in collaboration with the Tianjin Urban Planning and Design Institute (TUPDI). It forms part of the Tianjin New Binhai masterplan, which was designed by German firm GMP. 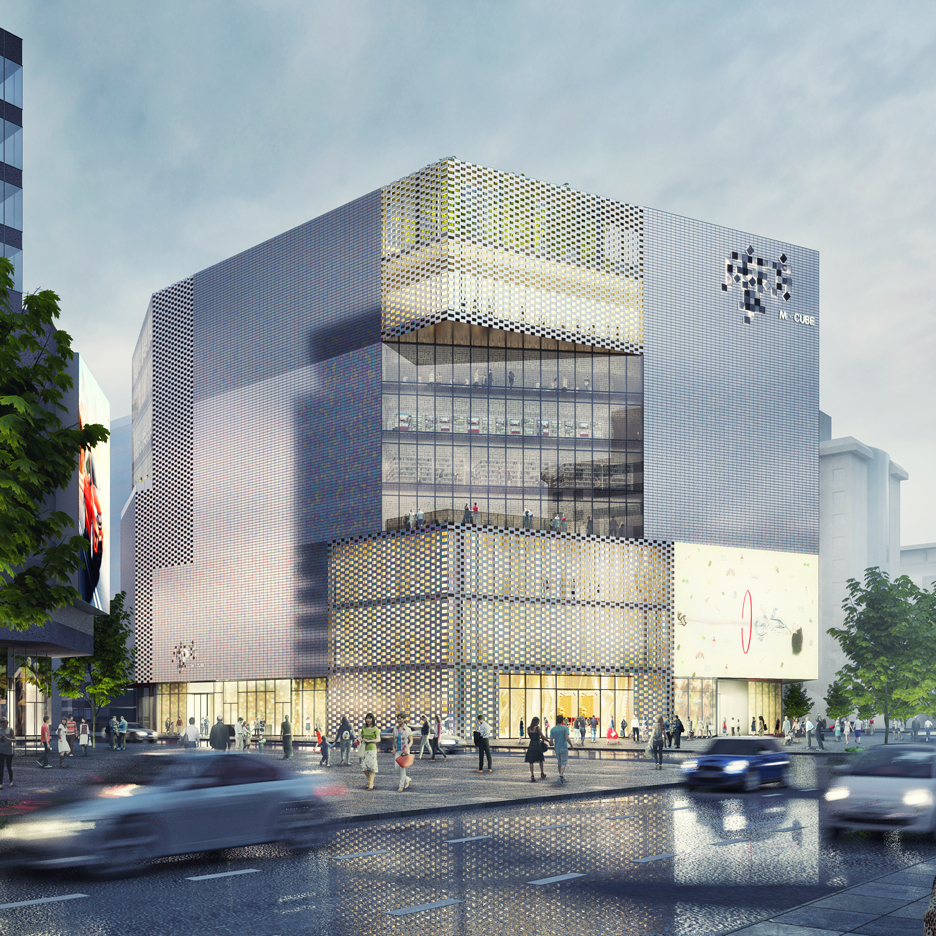 Located outside of central Tianjin, the fourth most-populous city in the country, the masterplan occupies a 120,000-square-metre site. It aims to transform the coastal industrial zone and former port into a new centre of commerce.

The five-storey library building will accommodate a programme of educational facilities. Along with the auditorium, the ground floor will offer reading areas for children and the elderly.

On the first and second floor will be reading rooms, more bookshelves and lounge areas, while meeting rooms, offices, computer rooms and audio rooms will be located on the fourth and fifth floors.

Book storage, an archive and service spaces are placed in the subterranean level.

The Tianjin New Binhai masterplan will feature a mix of high-rise buildings, historic neighbourhoods and open spaces, along with a high-speed train that will run between the district and Beijing.

MVRDV's building will sit alongside a new exhibition centre by GMP, as well as other cultural buildings by Bernard Tschumi Architects, Bing Thom Architects and HH Design.

The Tianjin Binhai Library is due to open to the public mid-2017 and will be MVRDV's second project to complete in Tianjin. The firm's TEDA Urban Fabric finished in 2009, providing 280,000 square metres of housing and retail.

Winy Maas co-founded Rotterdam-based MVRDV in 1993 with Nathalie de Vries and Jacob van Rijs. The firm's completed projects include a library contained within a glass pyramid and a transparent interior for Hong Kong office block.