Rotterdam studio MVRDV has revealed its design for a shopping centre with a pearlescent facade, which is on target to complete this summer in central Beijing.

Designed for Chinese developer KWG Property, the Chongwenmen M-Cube will create a shopping destination and a cluster of new restaurants and bars for the neighbourhood between the Forbidden City and the Temple of Heaven.

MVRDV worked with manufacturers NBK and HDTC to develop a bespoke tile for the 33,000-square-metre building. The pearlescent finish will present a spectrum of colours, intended to give the building "a sense of craft and human character".

"The facade design balances between the desire of the client to create a striking building and the restrictive architectural conditions in that part of Beijing, demanding greys and beiges," said MVRDV co-founder Jacob van Rijs. 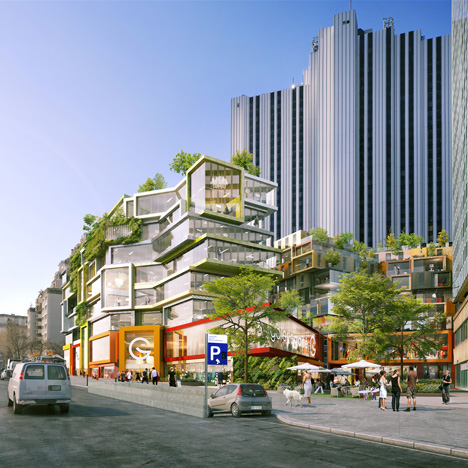 Some areas will be entirely covered in the tiles, while other areas will offer a pattern of solid and void. The aim is to offer an alternative to the aluminium panels that clad many nearby buildings.

"Depending on the viewpoint both parties can be satisfied, as the facade material appears differently when looking at different angles, it varies from subtle grey to all colours of the rainbow," added Van Rijs.

According to the firm, the project builds on research started in previous projects – in particular the tile-clad Gyre shopping centre and the Parkrand apartment complex with its varying material finishes.

The Chongwenmen M-Cube is designed to create as much commercial floor space on the plot as possible, so MVRDV's design approach was to start with the maximum volume allowed and then carve bits away.

This results in a faceted form, with facades orientated towards key views. This has the benefit of creating large spaces that can be used to display LED advertising.

Inside, the building will be organised around a large atrium. Shops will located on the lower levels, while restaurants and bars will be upstairs, with separate access provided by outdoor elevators.

MVRDV wasn't charged with developing the interior design, so this is being carried out by another firm.

There will also be a rooftop terraces and gardens, to provide "quiet refuge" from the busy city streets below.

MVRDV is also working on an elevated park that could become South Korea's answer to the High Line, an overhaul of a 1970s complex in Paris and a bowl-shaped art depot for the Museum Boijmans Van Beuningen in Rotterdam.