The 40-metre-high structure is made from 816 square metres of laser-cut steel. It was commissioned by BMW to mark its centenary, and features three vehicles – the BMW 328 Mille Miglia Roadster, Brabham-BMW BT52 F1 car and the BMW V12 LMR. All of the cars are working vehicles, rather than models.

Each is placed precariously at the tips of three of the structure's six spikes, with two of the cars held upside down over onlookers' heads. The curving steel has been designed to appear as "trails" from each of the vehicles.

The sculpture has been constructed from steel plates, which were cut into pieces and welded together to make a series of "structural skins" that don't require internal supports.

"This enabled us to stretch them as far as we could take them," Judah told Dezeen.

The sculpture is supported by a 70-centimetre-wide base, and weighs 77 tonnes. It's the latest in a series of pieces created by Judah for the annual auto show, all of which have featured cars suspended in the air. 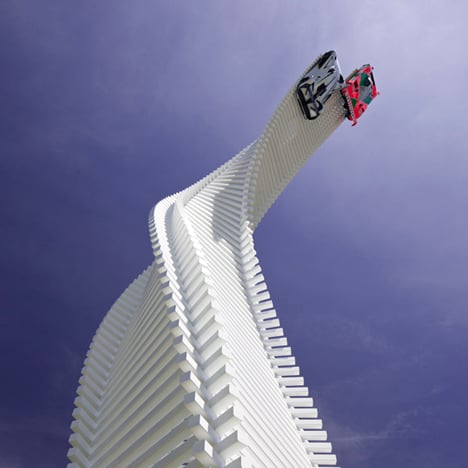 "The main challenge is to come up with something different, enormous and dangerous," the designer said. "Aside from the budget, the main factor that drives the project is the engineering."

"This always has to be right on the edge otherwise it wouldn't pay the appropriate homage to the amazing machines up in the air," he added.

"The enormous cantilevers balancing on one point needed the right elements to allow me to stretch the arms as far as I could take them. This really was an engineering feat."

The 2015 structure presented a pair of Mazda race cars a twisting track based on the form of a letter opener designed by Enzo Mari in 1962.

2014 saw the British artist create an arcing sculpture that curved over Goodwood House, with a pair of Mercedez-Benz race cars positioned to appear as if hurtling past each other.

In previous years he has created giant knotted sculpture, and a bright red looping structure that referenced the Alfa Romeo cloverleaf badge.

The designer was also commissioned by Porsche in 2015 to create a soaring steel sculpture for its Stuttgart museum.

This year's Goodwood Festival of Speed took place from 23 to 26 June 2016 in West Sussex, England.