Thick, galvanised-steel frames highlight a selection of windows on the concrete facade of this apartment block in Tokyo designed by Japanese studios Sasaki Architecture and Atelier O (+ slideshow).

The architects designed the block named Modelia Days Nakanobu to sit among shops and houses in Tokyo's Nakanobu district. In keeping with the modest scale of its neighbours, they spread 12 residences across four storeys.

The building's austere concrete facade is punctured by large square windows, while a combination of smaller square and rectangular openings are cut through its flanks.

"The town is a mixture of old and new. A grandma's confectionary and a jazz festival, pensioners among young couples, all share the same streets happily together," explained Ryuichi Sasaki of Sasaki Architecture and Rieko Okumura from Atelier O. 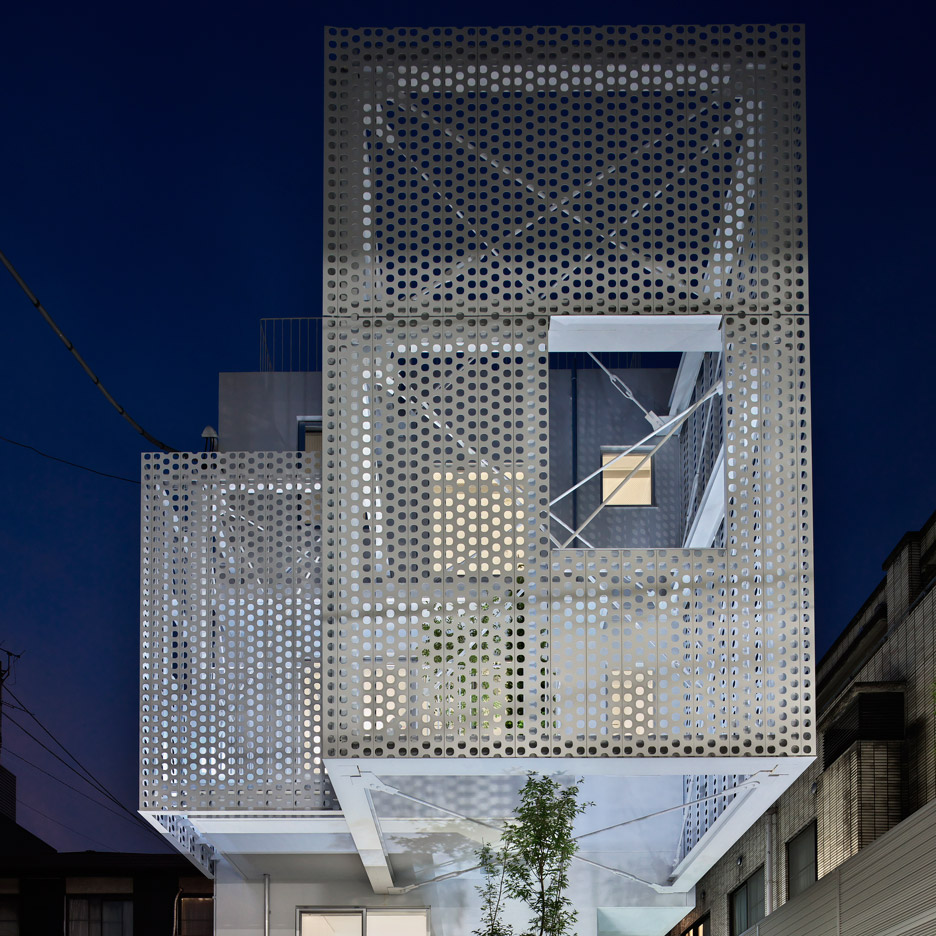 "In order to fit into this yet humble liveliness of the town, the building's scale is restrained to those of the neighbouring buildings," they said.

The architects chose to add projecting steel frames to two of the street-facing windows, in a bid to break up the concrete mass by drawing the eye in opposing directions.

"Galvanised steel window frames cast varying shadows to add a non-uniform expression on the facade, emerging as distinctive icons in the cityscape," explained Sasaki and Okumura.

"These reflect outside activity back into the room, again adding variety to the view to the city."

The smaller square openings help to ensure enough light permeates the inside of each home, where bare concrete and plain white walls create pared-back interiors.

"Every space inside and outside is rhythmically connected to each other through or across these square, pure openings," said the architects. "The shaped view of the city becomes the only ornamental element inside."

To maintain the Minimalistic aesthetic, the apartments also feature several furniture elements that combine different functions, including countertops that can also be used as desks and storage walls that double as cosy seating nooks.

"Minimalism here is in direct connection with the way of living," added the duo. "Simplicity when resolute, gives out a new flexibility."

Sasaki Architecture and Atelier O are both based in Tokyo. The studios also worked together on the transformation of an old warehouse in Tokyo into a gallery for porcelain dolls.

Photography is by Takumi Ota unless stated otherwise.