British artist and designer Gerry Judah has created a sculpture to celebrate the Aston Martin DBR1 car at the Goodwood Festival of Speed.

Designed by Judah as the centrepiece of this year's Goodwood Festival of Speed, the 31-metre-high sculpture built in front of Goodwood House supports a single historic Aston Martin.

"This year we feature a single, perfect, Aston Martin DBR1, the classic British racing-green sports car zooming off into the sky," explained Judah.

A DBR1 driven by British Formula 1 driver Stirling Moss was purchased for £17.5 million in 2018, making it the most expensive British-made car ever sold.

The structure supporting the car, which was engineered by Diales and fabricated by Littlehampton Welding, consists of one "impossibly thin" forty-seven tonne piece of steel. 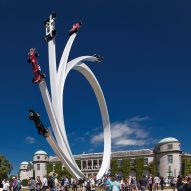 The looped steel structure has been designed to both support the car and to frame it, while being as simple as possible so that it wouldn't detract from the historic car itself.

"The biggest challenge was to make something simple and get the right balance – it has to be pure and simple," Judah told Dezeen. "The car was a racer and a Le Mans winner and we want to focus on that."

He also hoped that the simple structure would make it easy for visitors to the festival to engage with it.

"We hope that it has a lightness of touch and its not too formal. We wanted people to have the joy of interacting with it," said Judah.

"It's all about speed, but it's about celebration of achievement in a dynamic way, rather than just selling cars."

The Goodwood Festival of Speed is a motorsports festival that has taken place annually since 1993 in the grounds of Goodwood House in West Sussex, England.

Judah has designed numerous giant steel sculptures for the festival each intended to celebrate a particular car or achievement.

Last year he created a 52-metre-high star supporting six Porsches, while in 2017 he suspended five Formula One cars to celebrate the career of Bernie Ecclestone.