Designed by Croatian architecture firm NFO, the circular memorial sits at the top of Čukur hill in Banovina, Croatia, where the photographer was shot by a sniper in 1991.

Lederer worked as a cameraman for Croatian Radiotelevision and covered the Croatian War of Independence around the country.

His profession is reflected in the giant stainless steel ring, which encloses a circular panel of cracked and broken glass.

Leading up to the memorial is a curving pathway made of concrete slabs placed in black steel frames. Designed to resemble film frames, each of these represents a year of Lederer's life.

NFO worked with sculptor Petar Barišić on the structure, which was unveiled in August 2015 to mark the 24th anniversary of the photographer's death.

"The path goes tensely through natural terrain leading to the last slab, a memorial plateau without a number, representing the year of his death," said the firm, which has also designed a town square in Croatia.

"The glass membrane, pierced with a shot from a sniper, stops visitors' glance for a moment and confronts them with the reality of events on that location," added NFO. 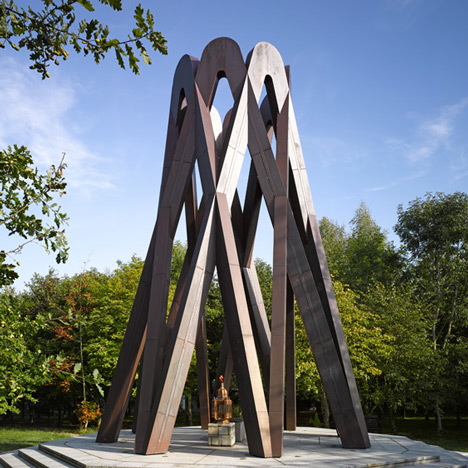 "At the same time, the perfect stainless steel circle suggests the continuity of life, framing a view of the same landscape filmed 24 years ago at the same place."

In addition to Lederer's death, the structure also commemorates the locations fellow Croatian cameramen and photographers were killed during the conflict, which took place between 1991 and 1995.

Other recently opened memorials include a fan-shaped stone structure commemorating the earthquake in Japan and a rusting steel tower in Italy that remembers the Holocaust by evoking a feeling of oppression.