London Festival of Architecture 2016: a soup servery, a rubbish bin-cum-play space and a flat-pack pop-up shop form part of an exhibition that explores how architecture can contribute to city communities (+ slideshow).

The installations are the result of an open competition set by the Royal Institute of British Architects, which asked for proposals that created community spaces within the urban environment.

The RIBA selected three of the proposals be displayed at its London headquarters in an exhibition called Constructing Communities.  It forms part of the London Festival of Architecture – a month-long programme of events and installations in the UK capital.

The first, designed by six architects from Feilden Clegg Bradley Studio, is a rhombus-shaped servery called Pea Soup House, which aims to raise awareness of poor air quality in London.

The name references the industrial revolution when London's air was described "as thick as pea soup" and Londoners were referred to as Pea Soupers.

"With air quality increasingly deteriorating in cities, we believe that architecture has a significant role in protecting the health of urban communities and improving quality of life for those at home in Britain," said project architect Charlotte Knight.

Located in the entrance of the RIBA, the structure is clad in horizontal battens that are coloured to represent one day of daily air quality – on a scale of one to 10 – from data that was collected at Oxford Circus in 2015. 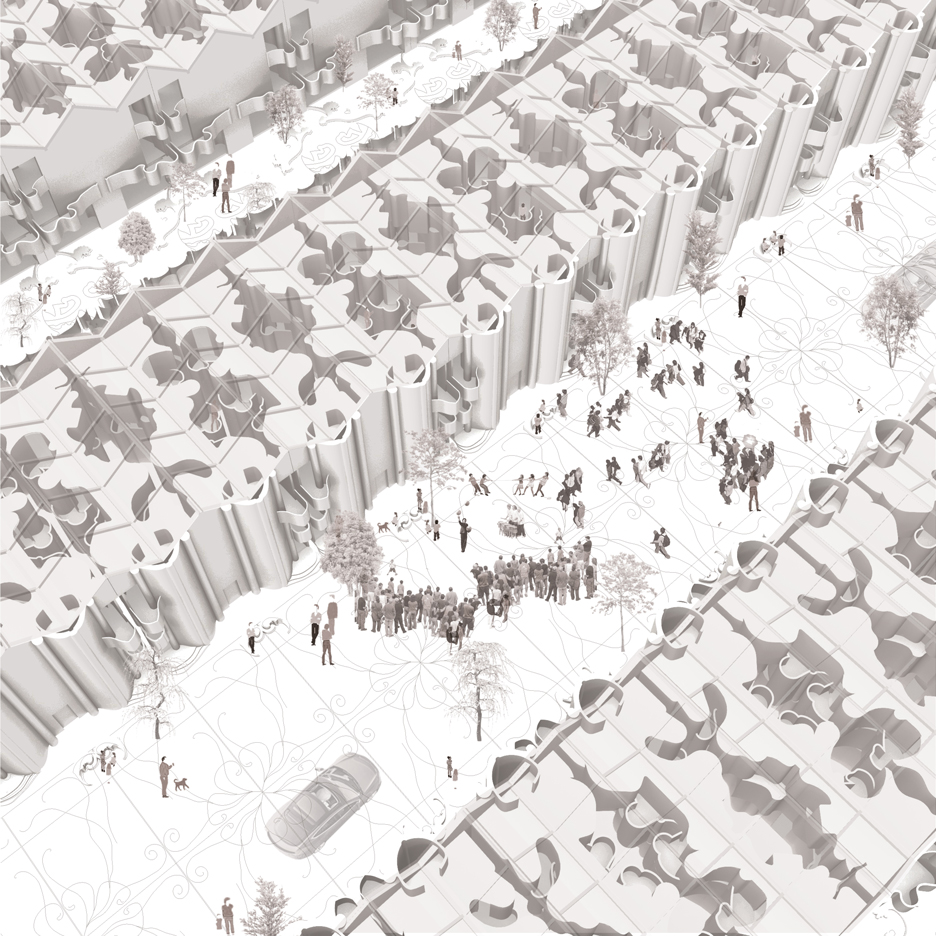 Inside, a small kitchen and counter serves soup that reflects the air quality data of that day. When it is good, a "super-healthy" green, pea and mint soup will be served, while a darker beetroot version will be prepared when the quality of air is poorer.

The architects are collaborating with King's College London, which monitors air pollution every day, while Clarke's Kitchen will cook and serve the soup between 1 and 2pm.

The second structure is designed by a group of graduates from Liverpool, called Margin, in response to the refugee crisis.

Entitled The Ephemeral Neighbourhood, the flat-pack, mobile structure occupies a rooftop space. It is designed to offer a place where new and existing communities can interact.

It features a slatted exterior that was designed to increase the stability of the structure, as well as provide a tactile finish.

Plywood was chosen as the main material because it is both cost-effective and sustainable, while also providing a contrast to the brick, stone and steel materials of the city.

An enclosed box with three slots allow the public to deposit donations of food, clothing and children's toys.

Each drop-off is catered to the type of item being donated so that soft items like clothing and toys fall into a pile, while more delicate items like food parcels are collected on shelving.

Next to this is an open space, featuring a bench for the public to sit, as well as shelves for information about the crisis to be exhibited. Charitable items can also be displayed and sold here.

"By creating a pop-up shop, people can browse the items without having to feel as if they are charity, removing any negative stereotyping of charity shopping," said the team.

Called Bin Togather, it combines waste drop offs with a punch bag, board games and seating. It is installed on the second floor of the institute.

"This daily task holds great potential for natural interaction between people," said the architects. "Combined with spaces to gather and rethink the act of waste it becomes a fun, playful activity."

Scaffolding forms the main structure, while fabric, nets, recycled paper, litter and office furniture are all used for the play accessories.

The three installations, and their development process, will be exhibited at the RIBA until 4 August 2016. The exhibition will run in parallel to the RIBA's summer exhibition in the architecture gallery, called At Home in Britain: Designing the House of Tomorrow.

The Constructing Communities exhibition forms part of the London Festival of Architecture 2016, which runs from 1 to 30 June.

Curated by director Tamsie Thomson, this year's London Festival of Architecture is themed around communities, with topics ranging from guerilla gardening to creative workspaces.

Other projects developed for the programme include installations for London's East Street Market by University of Brighton student and a pavilion that can be played like a giant musical instrument.

Photography is by Francis Ware.