Graduate shows 2016: a gridded megastructure contains a creative workforce of 1,400 in this proposal by Royal College of Art graduate Ohyun Kwon to address the housing crisis in the South Korean capital.

Entitled Short-term Housing for New Labour in Seoul, the project proposes an alternative to the so-called "gosiwon" – the low-cost, month-to-month rental rooms occupied by city workers with unreliable employment.

Instead, it suggests a vast, steel-framed structure containing a "matrix of autonomous rooms", where the city's creatives can both live and work in a collaborative environment.

"As being employed becomes a moral obligation, the project is born: a layer of work and live infrastructure as a means of social control," explained Kwon. 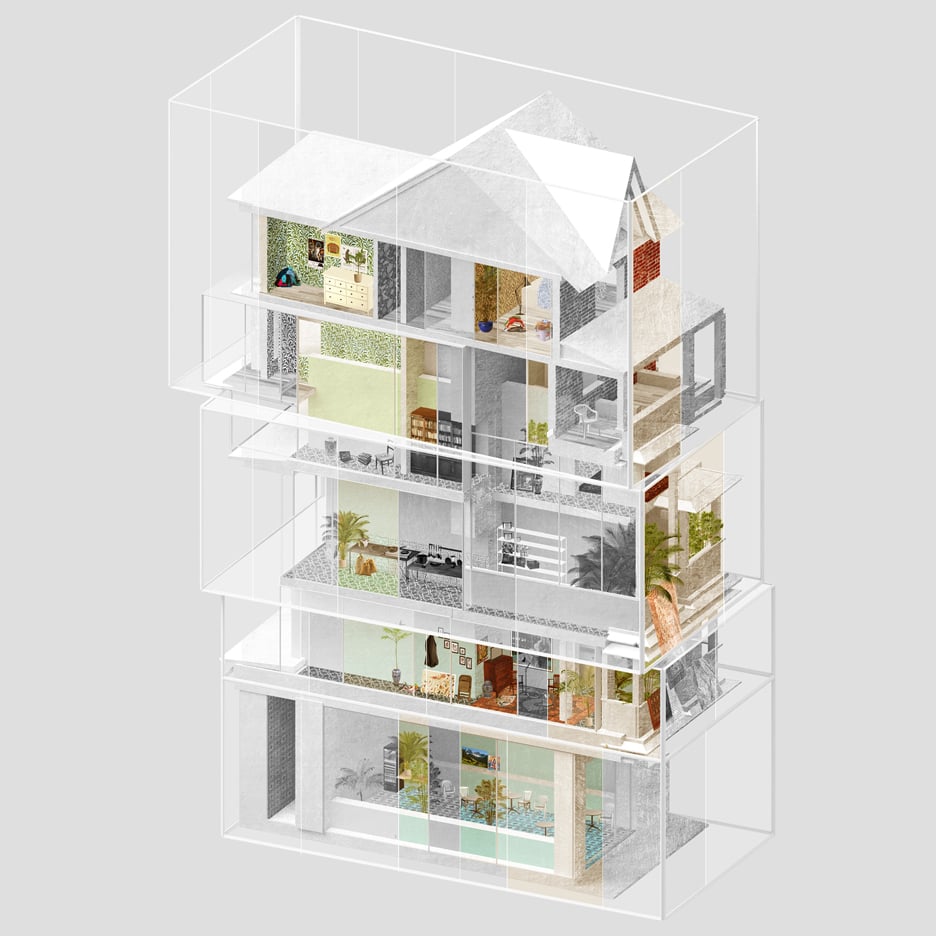 "It can accommodate 1,400 highly educated self-programmed labours who have chosen to live and work together as freelancers or artists in the era of creative economy."

Kwon developed the proposal for the masters programme in architecture at the Royal College of Art. He was part of the ADS1 study unit, which focused on developing new models for housing.

The project is a response to the unemployment crisis in Seoul where, in 2013, 17 per cent of the population were classified as NEETs, meaning not in employment, education or training.

"In 2013, the president announced a new policy to develop the creative economy as a new engine of economic growth," said Kwon.

"Gosiwons will not be sufficient any more as the dominant housing type for this new labour."

Working with a prefabricated steel framework to keep costs low, the designer proposes a three-storey structure that combines workspaces with compact living quarters and shared social spaces, ranging from cafes and saunas to a karaoke room.

These tap into the city's culture for "bangs" – a word that translates as rooms but incorporates a wide variety of social activities. Kwon has created 16 different "bangs" in his proposal.

"I think the emergence of these rooms can be seen as a response to the need to reestablish spaces for social interaction that got lost during the process of urbanisation," he explained.

There are no corridors in the building, so each space is directly connected to several others.

Storage spaces are built into the walls, plus residents can use a self-storage unit at the building's perimeter to store their larger personal belongings.

There are also courtyards, accessible both to occupants and the public.

Kwon claims the structure could accommodate up to 1,400 people and would be funded by a mix of small and medium enterprises, as well as by larger conglomerates.

Short-term Housing for New Labour in Seoul is on display as part of ShowRCA. Dezeen is media partner for the graduate exhibition, which runs from 26 June to 3 July.

Other highlights include a toaster that sneezes out bread crumbs and a vacuum cleaner that poos, a proposal to relocate the Parthenon from Athens to London and an alternative to plastic made from cow's milk.