Wooden slats and bleachers provide the multi-faceted volume of this waterfront sauna by Avanto Architects, allowing visitors to climb the roof for a better view of the sea or to lounge in the sun (+ slideshow).

Named Löyly, the coastal sauna is located in Hernesaari, a former industrial area of Helsinki that is currently being redeveloped to include housing and parkland. The building also houses a restaurant.

As the area is also home to a cruise ship terminal, Helsinki-based Avanto Architects thought they could give tourists arriving in Hernesaari the opportunity to experience an authentic Finnish sauna.

The country, which has a population of 5.4 million, has over three million saunas – roughly one per household.

The growing popularity of private saunas meant the country's traditional public sauna culture was at risk, said Avanto Architects, but the studio believes the facility's importance to city communities is now being rediscovered.

"Sauna bathing is an essential part of Finnish culture and national identity," said the architects. "Public saunas used to be common in bigger cities but now that most new apartments have a sauna of their own, public saunas have decreased dramatically in number." 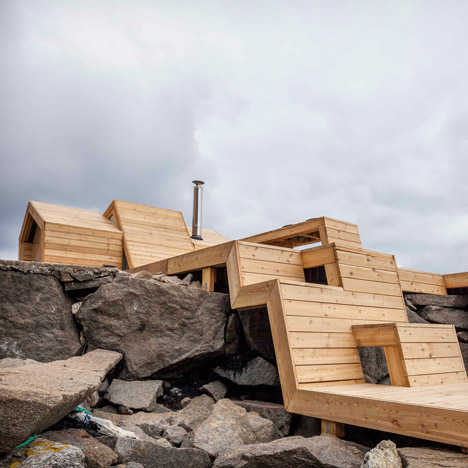 "But as a sense of community is becoming a more and more important part of new urban culture, many new public saunas are being planned."

The faceted volume of the sauna building is designed to sit low to the ground so as not to block sea views for future residents.

Its heat-treated pine cladding is intended to grey with age to blend in with the stony coastline.

The architects described this irregularly shaped outer shell as a "cloak", as it covers the rectangular black box that contains the sauna and restaurant areas.

Pockets of seating are partially sheltered between the inner and outer envelopes, with the slats giving bathers views of the sea but privacy from passersby and protection from the harsh coastal climate.

"When the wooden building turns grey, it will become more like a rock on the shoreline."

The cladding is stepped in places to allow visitors to climb up to a rooftop lookout point, which will double as a viewing platform for watersports events in the future.

At ground level a further terrace juts out over the coastline and a flight of stairs lead down into the sea.

The interior, which can accommodate up to 100 bathers in addition to diners, was designed by local office Joanna Laajisto Creative Studio.

The sauna is divided into three sections behind a leather curtain – one is continually heated, another heated just once a day and the final area is a traditional smoke sauna.

A spa area with a cold water basin and fireplace is located between the rooms.

Materials including blackened concrete and steel, pale Scandinavian birch wood and wool were selected for their long-lasting qualities.

"The objective of the design was to create an atmospheric restaurant which compliments the strong architecture of the building," said the studio. "The approach could be called soft minimalism."

Sauna cultural is also hugely popular in Finland's neighbouring Scandinavia. Recent examples including an industrial-styled sauna with a rusty steel exterior and a warm timber-lined interior in Sweden and a wooden sauna that steps over bounders on the Norwegian coast.