Fraher Architects has added a simple extension with a sloping glass roof to an early 19th-century house in London, creating a bright new dining area that opens onto a garden patio (+ slideshow).

Located in a conversation area, Lambeth Marsh House is part of a 1820s terrace that was originally occupied by artisan workers.

London-based Fraher Architects was tasked with upgrading and extending the two-storey brick property.

The building's historic significance means it is listed with a Grade-II conservation rating, so any alterations had to be sympathetic and in keeping with its context and heritage. 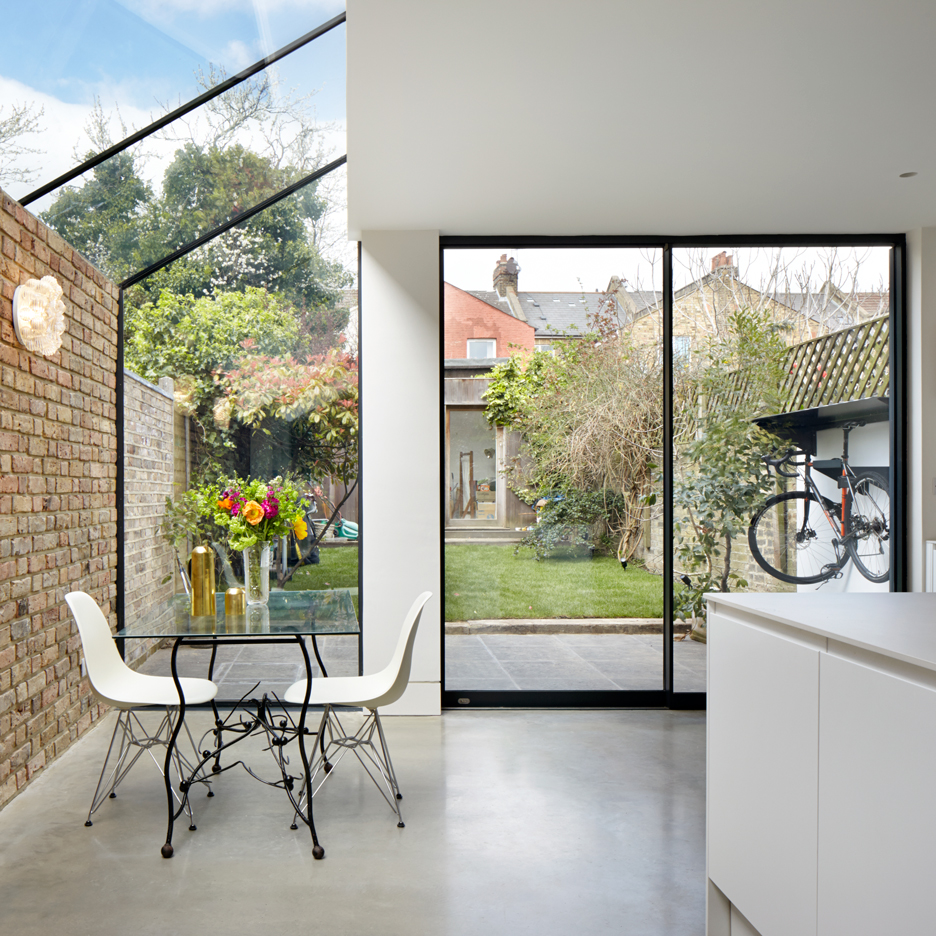 "Our concept and challenge was to breathe new life into all floors whilst respecting the heritage of this listed building and restoring some of the lost historic detailing," explained the studio, which is led by Joe Fraher and Lizzie Webster.

The building had been unoccupied for over a decade and was in need of comprehensive refurbishment, involving the restoration of the wood-panelled walls, architraves, skirting and panelled fireplaces to their original condition.

At the back of the house, a glazed side-return extension occupies the space between the brick party wall and an existing single-storey rear projection with a mono-pitched roof.

The extension allows the kitchen to be expanded to accommodate a dining area that also connects with the open-plan living space at the front of the house.

A glazed roof mirroring the pitch of the existing rear projection ensures plenty of natural light can enter the new and original ground-floor spaces.

A large glass panel incorporated into the end elevation pivots to open the space up to an outdoor patio.

Throughout the refurbished interior, the use of traditional materials and techniques – including European oak for the bespoke joinery – helps to retain the building's original character.

"Materiality was very important to help produce a sensitive contemporary design, whilst assisting our conservationist approach," the architects added.

Full-height wood panelling in the bedrooms conceals fitted cupboards, whilst the desk and bookshelves in the study next to the lounge are also crafted from oak with integrated LED lighting.

Fraher Architects has completed several extensions to properties in London, including an angular addition to a flat in the northwest of the city clad in charred wood, and a two-storey extension to a brick house with a window that stretches all the way from the ground to the roof.

A sunken glass-walled extension to a 19th-century house and a copper-clad roof extension to an attic flat are among the examples that demonstrate increasingly ambitious attitudes towards home improvement.