The handheld device functions as a microphone that profiles the voice of the speaker and maps it onto instrumentation.

The Vochlea device transposes the melody of the user's voice onto an instrument, which is selected according to individual tonality. Currently the Vochlea includes drums, guitar, bass and brass.

A control panel can also be attached to the device to allow users to lay down multiple loops, experiment with combining various instruments, and add effects and distortions.

The device – which is based on the shape of sea shells – is still in prototype stage, but Wright hopes to produce the Vochlea with a brass mouthpiece and mother of pearl inlay – a reference to the materials used in traditional instruments such as violins and trumpets. 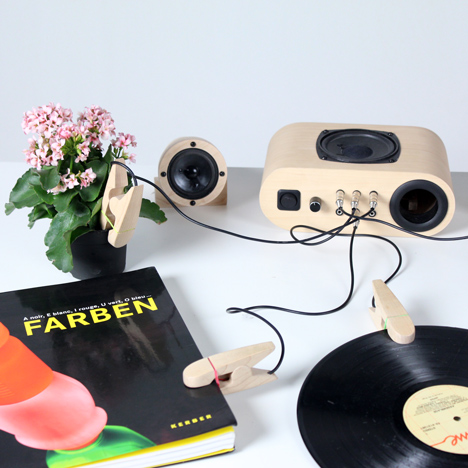 Wright designed the system for use at an early stage of creation, as a way for individuals to capture and express initial ideas.

"It's a bit like sketching – you can sketch a building on paper and convey the essence of the design, but you can't build it out of paper," explains the designer. "That's where Vochlea comes in."

"It takes all the rich information we can convey vocally and acts as that seasoned collaborator that's able to understand what you meant, and translate it into real instrumentation."

The designer also suggests that Vochlea could be used in the studio and on stage. It it suitable for users with any level of musical ability.

Vochlea is on display at the ShowRCA 2016 exhibition, which is being held at the Royal College of Art's Kensington campus from 26 June to 3 July.

Dezeen is media partner for the event, which is also showcasing wearable sex toys, milk-based plastic and a set of "cute" kitchen appliances.