Three corrugated cylinders are raised on stilts above subterranean living spaces and gardens to form this Madrid house by Z4Z4, which is captured in a science-fiction-inspired photoshoot (+ 360-degree videos).

She wanted her family to be able to comfortably spend time together, but also some have privacy from each other and their neighbours.

Beneytez's solution was to design two contrasting spaces – one submerged below the ground and the other stilted above it.

"She wanted to house a family with the possibility to maintain double possibilities," the Spanish architect told Dezeen. "The house should be capable of representing all the scenes that she was trying to inhabit." 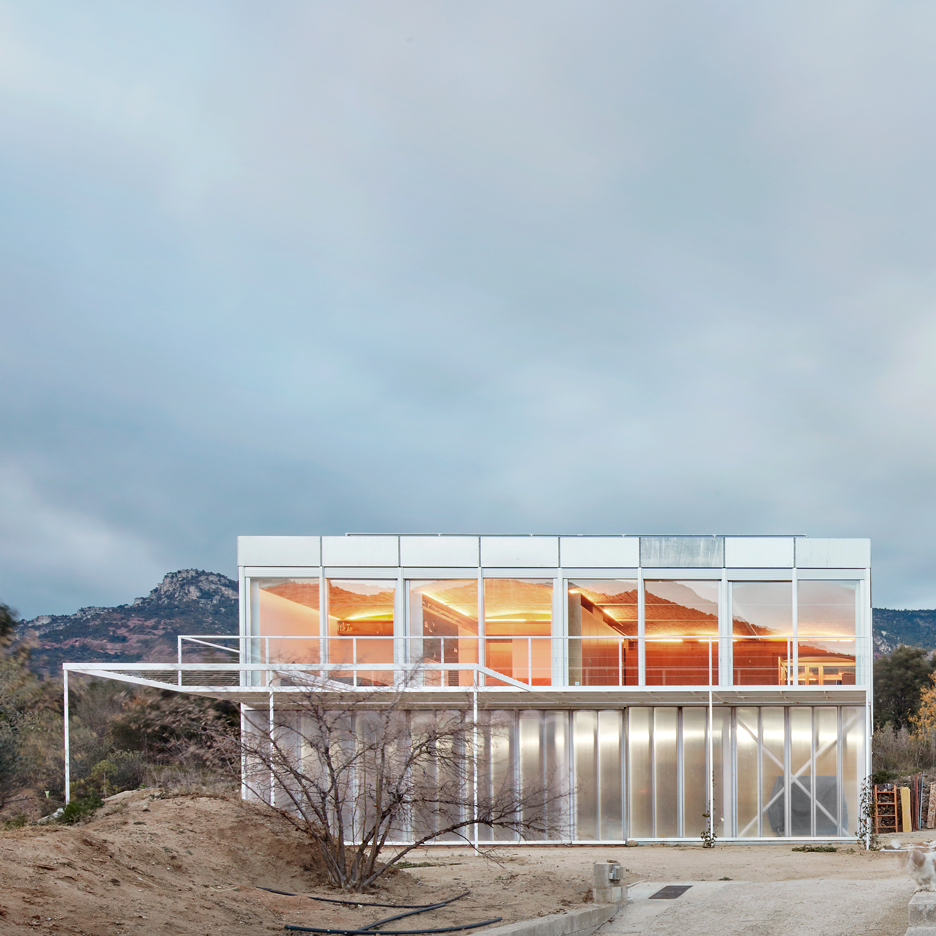 "One of the houses is organised to inhabit the soil with its habits and routines. The other was made light-heartedly, emancipated from the ground, in the air, flying at a double height over the garden," he added.

The two models – one wearing a cardboard box as a headpiece and the other a white-blonde wing – are shot carrying out everyday activities within the house, including sunbathing on the sunken lawn and taking a bath.

The costumes and concept for the shoot were influenced by science-fiction novels, said Beneytez, who was reading the Mars trilogy by Kim Stanley Robinson while designing the house.

"I was aware of lightness, the emancipation of the gravity, and trying to discuss the forms of gravity, so I was around these topics and I saw the house through this image," he said. "Miguel de Guzman did the rest."

The three intersecting cylinders each contain bedrooms. These are elevated above sunken living spaces and gardens to satisfy the client's need for separation between the communal and private areas of the house.

Sheets of corrugated and perforated metal wrap the volume to create secluded balconies, but this curtain-like skin is drawn back from bedroom windows to provide uninterrupted views.

Two rectilinear blocks containing the lounge and kitchen are separated by a planted patio. This double-height space is sheltered beneath the base of the curving volumes overhead, while two further gardens accommodate a pool and lawn.

Beneytez based the proportions of this underground space on a Modernist house designed by Mies van der Rohe in Connecticut.

"The house that is underneath is a 'modern house' more properly based on the Morris Greenwald House of Mies van der Rohe," explained Beneytez.

Beneytez chose contrasting materials to heighten the contrast between the two portions of the house.

While the upper volume is finished with perforated, mirrored and light-coloured materials associated with lightness, the subterranean base is constructed from concrete and stone that resonate with heaviness.

"We wanted to produce the effect of the heaviness and promote the gravity forms," he said. "The floating house is emancipated from the soil, gravity, or the earth. It has no relation with it."

Other architectural projects featuring unusual photoshoots include a concrete house in Alicante shot as a crime scene and a São Paulo residence filmed from the perspective of a cat.