Metal and plastic shutters cover the walls of this residence in Spain's Catalonia region, which is split in two parts to provide seasonal quarters for a family (+ slideshow).

Brooklyn studio Fake Industries Architectural Agonism and local architecture firm Aixopluc worked together on the 330-square-metre residence, which sits in a hazel-tree field on the outskirts of Alforja – a rural town at foot of the Serra de la Mussara mountains in eastern Spain.

The clients requested a family residence that would allow them to holiday in their own home. So the architects designed the OE House to have an openable ground floor to be used exclusively in summer months and a more contained first floor for the winter.

"The OE House is a montage," said the architects. "The clients wanted a double house, so they could move from one half to the other, according to their state of mind."

"They did not like to spend their holidays traveling; they preferred to move downstairs, and do it for real, closing the quarters above."

Each floor is equipped with its own kitchen, lounge and bedrooms – two downstairs and three above – creating two self-contained living spaces.

The base of the house is surrounded by bi-folding translucent shutters that can be drawn back to connect the living space with a veranda.

Spanish architects Casos de Casas struck on a similar idea when they used corrugated polycarbonate panels to create varying levels of insulation around a hillside home named Seasonless House in the coastal province of Castellón.

This "seasonal membrane" around the ground floor of OE House allows the family to respond quickly to the weather, and is paired with a shiny metal ceiling and exposed beams. 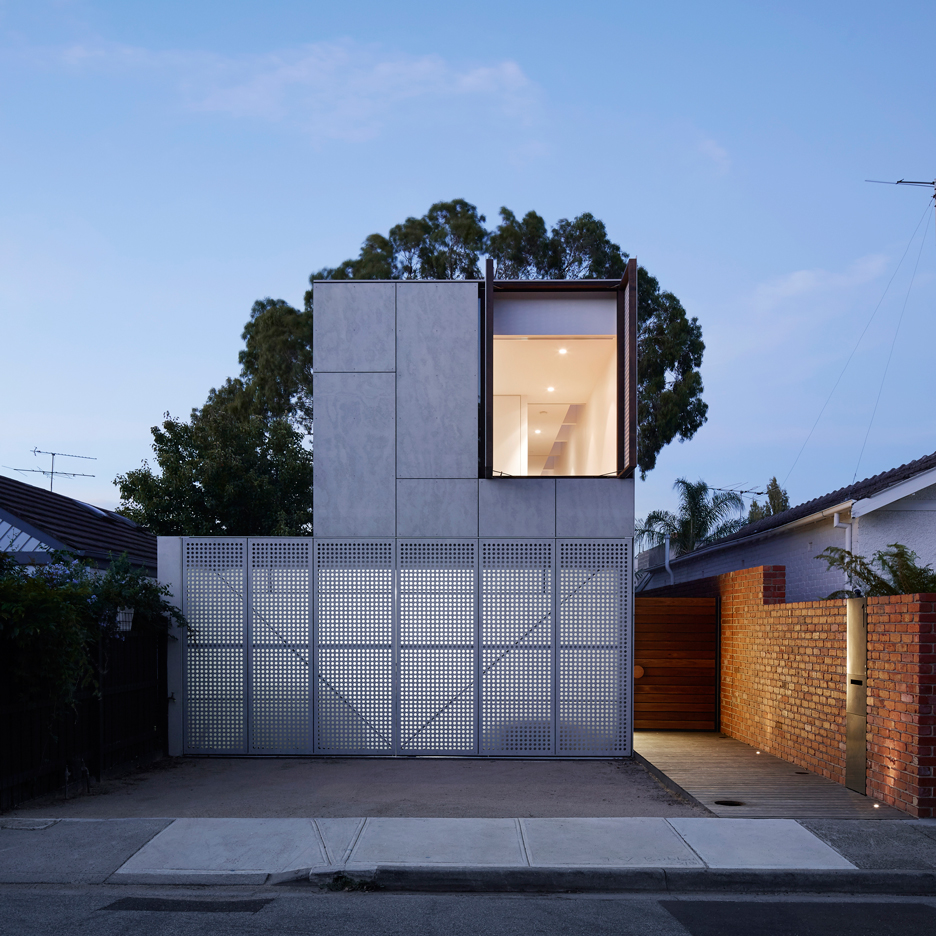 Bedrooms and bathrooms are contained within a box to the rear, which is made from oriented strand board – a type of engineered wood product.

The building's flat roof provides an additional sitting area during the warmer months.

In cooler weather the family can decamp upstairs to a more traditionally decorated space with sliding wooden doors and a vaulted brick ceiling based on the local "volta catalana" technique. Shutters can be pulled down over the glazed walls to provide further warmth.

"We provided them with two well-known domestic environments – the open frame of the case study houses for the hedonistic pleasure of the warm season, topped with the interiorised existentialism of Le Corbusier's Maison Jaoul for the windy months in the Serra de la Mussara," said the team. "We did it literally."

"The resulting exquisite corpse ensures the schizophrenic differentiation of modes of habitation as much as it negotiates the impossible encounter of both types," they added.

This mixture of industrial and traditional materials and techniques helps to further define the two parts of the house, but were also selected to achieve a short build time.

However, issues with a contractor and a 30 per cent reduction in the initially agreed bank loan meant the project took four and a half years to complete.

"Each setback was an opportunity to build a cheaper and better made home, with a breath of collage and bricolage air," said the architects.

"Learning from anonymous neighbouring case studies, we reached a crossroad between a mas [traditonal Catalan farmhouse] and a peasant's storehouse," they explained.

The family lived on site throughout the construction period, camping on the roof in summer, and watching their new home progress. This arrangement meant the clients built a close relationship with the builders and local craftsmen.

To celebrate the completion of the project the local winter feast calçotada – which involves the consumption of giant spring onions – was held at the property.

Photography is by José Hevia and Raul Ruz.