The felt AK 2 Workspace Divider Lamp creates a visual and audio shield from the person sitting on the other side of it.

Hanging from the ceiling on thin cords, the rectangular felt divider bisects a table to create two separate workstations. An LED fluorescent bulb on either side of the divider provides equal levels of light to the two workers.

Designed by Ivan Kasner and Uli Budde, the lamp has been created for open-plan spaces, where noise levels can provide a distraction from work. 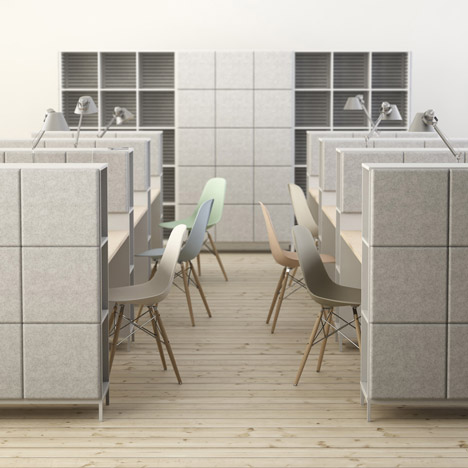 "Its large shape shields users from their environment, enabling them to work in a relaxed and concentrated manner," said De Vorm, which has also released seating designed in partnership with Benjamin Hubert.

The AK 2 Workspace Divider's internal acoustic foam acts as a sound dampener, helping to minimise acoustic reverberation and create a quieter and more private area for workers. By placing several lamps alongside each other, the acoustic effect can be increased.

A 2014 report by British office equipment company Expert Market found that 54 per cent of workers would prefer to work in separate offices, with many employees placing "peace and quiet" as preferable to other benefits like regular breaks.

The lamp's PET felt exterior is made from recycled bottles, and is also itself recyclable. It comes in grey and dark grey as standard, but can be ordered in eight more custom shades, including green, pink and blue.

The light can be combined with De Vorm's AK 93 Workspace Divider to create a nook that's enclosed on several sides.

London studio PearsonLloyd has also addressed the issue of privacy in open working spaces with its Zones collection, which focuses on creating separate areas for collaboration and relaxation within an open office.

Office furniture designs that create a barrier to distraction from colleagues were also a common theme among the experimental products on show at Milan design week.