The car park formed part of the infrastructure for the Olympic Games, which were hosted at the Queen Elizabeth Olympic Park in east London in 2012, at venues including Zaha Hadid's curvaceous aquatics centre and the timber-clad velodrome by Hopkins Architects.

Following the games, the London Legacy Development Corporation organised a design competition to find a way to improve the visual relationship between the utilitarian car park and its new neighbours. London-based Haptic was the winner.

The Lea Navigation Canal runs close to the car park, and the angled forms and slightly reflective properties of the new cladding were developed to create a dialogue with the shimmering reflections on the water. 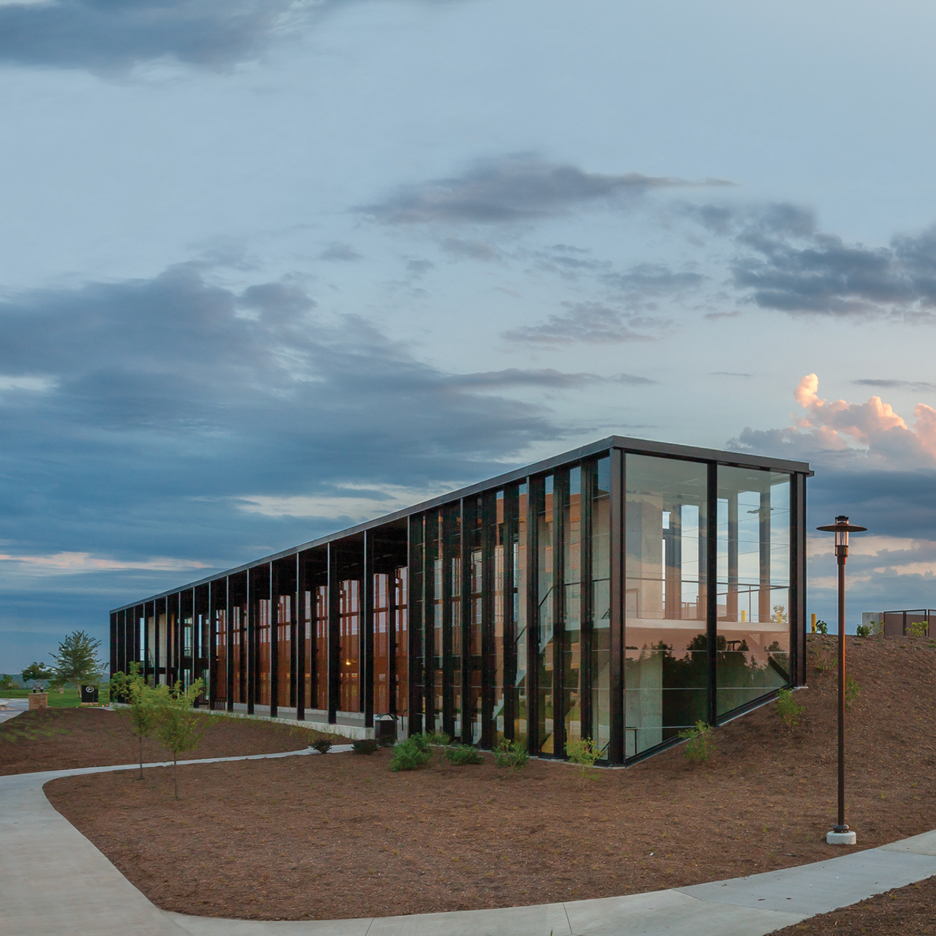 "We tried to create something that wraps the car park in a way that doesn't completely cover the existing structure, but deals with the utilitarian look of it and gives it a new elegance and contemporary feel," architect Timo Haedrich told Dezeen.

The building's simple, open concrete structure remains visible at ground level, creating a contrast with the more opaque and sculptural metal band that wraps around three sides of the upper storey.

The aluminium cladding helps to prevent noise and light pollution from disturbing residents who live on the opposite side of the canal.

Its perforated surfaces also allow light and air to enter, so mechanical ventilation is not required.

The facades comprise modules made up of triangular panels, which are arranged at an angle to one another so they form surfaces that vary in depth.

On the southern elevation, the panels extend further and open up slightly to signal the position of crossing points.

The also serve to enhance the visual connection with the adjacent Here East – the former Olympics media centre, which is undergoing a refurbishment led byHawkins/Brown that will see it reopen as an innovation hub for London's creative and digital industries.

The panels are covered in powder coating in subtly different shades, enhancing the geometric pattern. The slightly reflective surfaces also produce reflections that alter when viewed from different angles.

"We were inspired by the canal, so we chose a material that reflects light and takes on the properties of its environment," Haedrich added.

"The way the four panels for each unit are angled means they catch the light in different ways and give the building a more dynamic look."

Haptic worked closely on the project with multidisciplinary studio Bob Design, which developed supergraphics to assist way finding throughout the building.

Huge letters applied to each of the structural cores also incorporate subtle graphic cutaways that indicate the position of lifts or staircases.

Haptic is led by Haedrich with Tomas Stokke, Scott Grady and Nikki Budenschøn.

Previous projects include a shop and cafe in an old brick railway arch and an office interior in Oslo featuring a sculptural staircase.