Bjarke Ingels' firm has revealed images of a huge inflatable pavilion it created for this year's edition of the annual music festival in Roskilde, Denmark (+ slideshow).

Described by BIG as a "bubble-like cloud pavilion", the bulbous white structure created a 120-square-metre canopy across the serving area and seating of a VIP bar for Danish brewing company Tuborg.

The pavilion went from flat pack to fully inflated in just seven minutes, and was kept blown up throughout the festival thanks to a pair of integrated wind turbines.

Colour-changing LED lights we are also added, allowing the structure to regularly change its appearance.

BIG calls the project Skum – the Danish word for foam. The aim was to remind visitors of the inflatable castles of their childhoods. 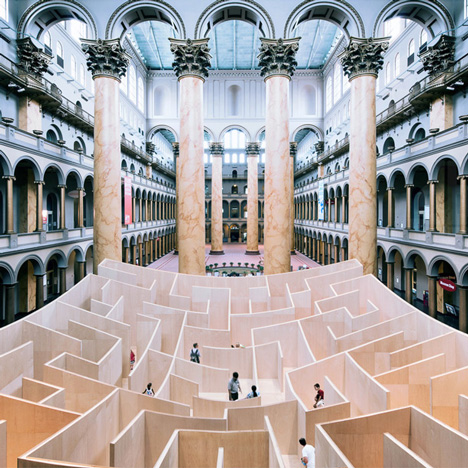 "The idea of ​​using a bouncy castle came about because one can create any kind of structure with this type of material," said Jakob Lange, a partner at BIG's Copenhagen office.

"The process of inflating and deflating the castle is easy. Producing it turned out to be much more difficult though than we had initially expected," he added.

"The first manufacturer completely gave up and we were under enormous time pressure. But the end-result is the most beautiful thing you could imagine."

BIG was commissioned to create the mobile structure for three Danish institutions. As well as the Tuborg Brewery, it will be used by the Chart Art Fair and the ARoS Aarhus Kunstmuseum.

Its next stop will be Charlottenborg Palace, Copenhagen, for the three-day-long Chart event at the end of August. After that it will move to ARoS, which is Denmark's oldest public art museum.

BIG has also created this year's Serpentine Gallery Pavilion in London's Kensington Gardens. Other temporary structures by the studio include a concave wooden maze at the National Building Museum in Washington DC and the Danish Pavilion at the Shanghai Expo 2010.