Los Angeles firm A-Industrial has clad the walls and ceiling of a juice bar in plywood slats, creating a sculptural geometric interior (+ slideshow).

The Juice Served Here shop is intended as an escape from the busy street on which the storefront sits. The firm behind the redesign, A-Industrial, provides both design and building services.

Patrons enter the store through a compact front terrace that appears to be carved out of the building's mass. A giant pivoting door separates the interior and exterior spaces.

The walls and ceiling of the store are all clad in plywood strips that create continuity between the interior and the exterior. According to the architects, these strips attract one's gaze to the height of the space, thereby compensating for its narrow dimensions.

Light fixtures have been integrated between the wooden slats, which also act as an acoustic damper within the shop. Materials used on the interior include a polished concrete floor and a long slab of marble for the bar itself.

All of the store's built-in furniture was made by A-Industrial. The freestanding pieces were created by the company Native Standard in Long Beach. 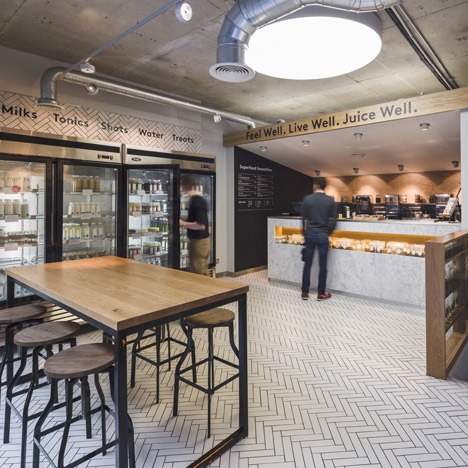 Tabletops and seating were fabricated using the same baltic plywood as the wall and ceiling surfaces. They were built on simple white steel frames to complement the space.

A skylight provides natural light to the interior, while white backlit acrylic panels serve as product displays in the back of the store.

Many firms opt to realise their designs instead of enlisting contractors to execute them. Design-build programs have long been popular in architecture schools, but the formula has been increasingly successful in the mainstream architecture and construction industries.

The work of British studio Assemble exemplifies this trend, which is also common in the United States. Examples of projects range from affordable housing units in Los Angeles to rugged cabins built in Colorado.