A+Awards: we're launching a major collaboration with Architizer profiling winners from its A+Awards. First up is this house in the Mexican highlands, with rammed-earth walls made from soil excavated on site (+ slideshow).

Casa Candelaria by the Mexico City-based firm is located on the outskirts of San Miguel de Allende, a city in Mexico's central highlands.

The design of the 1,50o square-metre home is based on the traditional Mexican hacienda, with living areas arranged around courtyards.

The 50-centimetre-thick rammed-earth walls are made using soil that was excavated directly from the site, with natural pigments added to create an ash-toned finish.

This material helps insulate the house in an area where the temperature can drop dramatically at night. 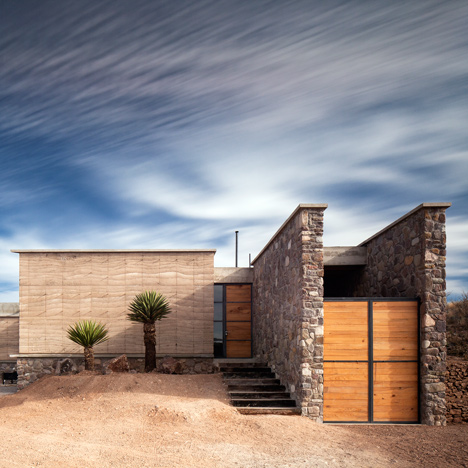 Using materials sourced on site also helped reduce the cost of the project.

The house is split into four main volumes, with a central courtyard that has a concrete roof structure.

Inside, the floors and fittings are made from parota wood, also known as Guanacaste wood after one of the central-American region it grows in. The same wood is used on the full-height window shutters.

Casa Candelaria was one of winners of the Private House (1,000 to 3,000 square foot) category at the 2016 Architizer A+Awards, which promote and celebrate the year's best architecture and products.

Other projects by Cherem Arqutectos include a corrugated concrete house for a family of four just outside Mexico City.