Dutch office Studio Nauta created an ensemble of new and old gabled blocks for this family holiday home, which is secluded within a dense forest on the southern coastline of the Netherlands (+ slideshow).

Named House in the Woods, the property is divided up into four volumes to break up its scale. These are connected by both a courtyard and a partially enclosed corridor.

These are joined by two significantly larger white blocks with corrugated fibre-cement roofs, which house living and sleeping areas.

"The challenge was to establish a form of dwelling in this 'forest room' whilst retaining the direct relationship to nature, especially the light and air," said studio founder Jan Nauta.

"The house therefore assumes a low and fragmented configuration in order to allow nature to absorb the house into its being," he added. "The white-grey colour scheme acts as a canvas to the dynamic light conditions of the site."

The first of the two new volumes is partially sunken into the sloping topography, creating the appearance of a single-storey block from higher ground. 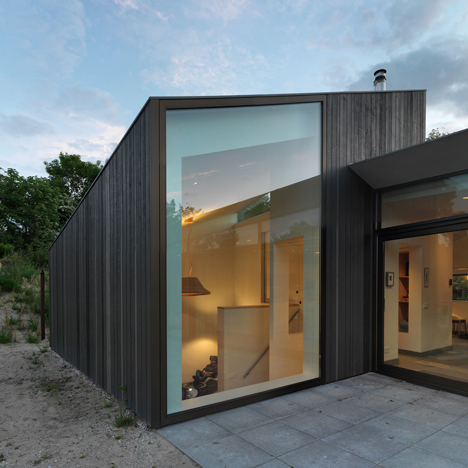 But at the lowest part of the site, two rows of large windows face the forest from the eight bedrooms and bathrooms set within.

The second block contains a games room and utility spaces in its base, as well as an open-plan living space with sliding glazing that connects with the courtyard at ground level.

A children's dormitory and bathroom occupy its uppermost storey.

The courtyard and its perforated brick walkway are designed as an extension of the lounge and dining area, and to provide greater continuity between the house and its grounds.

Bright red sofas and wire-framed chairs add touches of colour to the neutral-toned interiors, which are dressed with pale timber furniture and textiles in muted tones. The furniture was designed by a design collective named Bendewerk.