Dribbles of gold fill the cracks in the floor of this Kyoto apartment, designed by architecture studio TANK to replicate the traditional Japanese pottery technique of kintsugi.

This led to a design that integrates traditional craft techniques – one of which resulted in the drizzles of golden-hued resin that embellish the screed floor.

The method used to create this effect is called kintsugi, which means to "repair with gold".

To recreate this, Fukumoto intentionally chose a type of cement flooring that is prone to cracking. Once set, a gold-coloured epoxy resin was used to plug the gaps.

"The Japanese have traditionally repaired broken ceramics by glueing fragments together with lacquer and gilding the seams with gold powder to enjoy the beauty of imperfection," said the team. 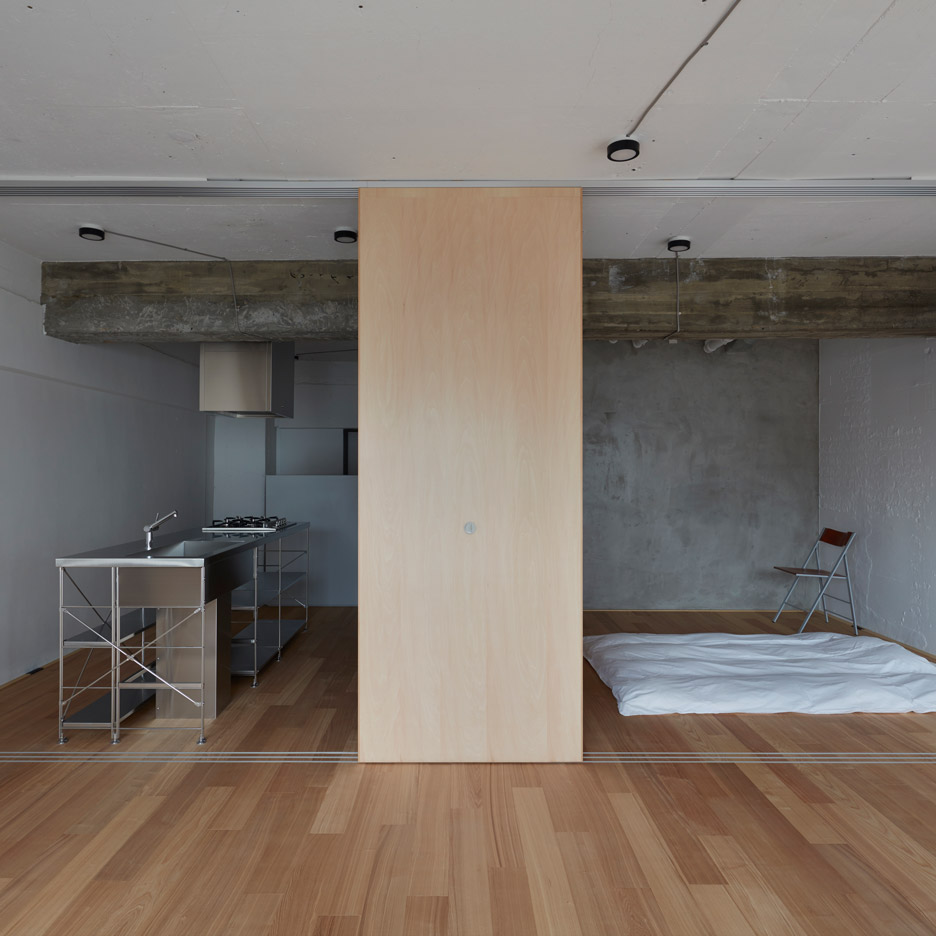 FrontOfficeTokyo strips back small Tokyo apartment by pulling down walls

"Using traditional mortar, we emulated the art of kintsugi in the living room by joining the cracks, thus transforming what was considered imperfect into a subject of beauty," they added.

Another traditional technique was used for the flooring of the bathroom and kitchen areas, which are slightly raised up on one side of the apartment.

Here, the architect adapted the method for creating Japanese lacquerware – a craft that involves covering a surface or object with a sap-based coating that hardens once dry.

A layer of fibre-reinforced plastic netting was laid over the floor, then covered with transparent resin.

"The translucent resin is polished to reveal the underlying glass-fibre layers over the wooden base, resulting in a translucent yet complex visual texture, while achieving material strength and the waterproofing needed for the location," added TANK.

Other details in the apartment include a pair of mirrored doors, designed to create a private dressing area when opened.

There is also a set of glass doors that open out to a narrow balcony, offering views of the nearby Kiyomizu Temple and five surrounding mountains.

Otherwise the decor is kept minimal, with white walls, simple furnishings and exposed concrete beams dotted with paint stains. Residents are encouraged to venture outside.

"At a glance, each element may be simple, but as a whole serves an intuitive and creative atmosphere for the creative resident," added TANK.

Based in Tokyo, TANK has been in operation since 2010. Past projects by the studio include an apartment where bits of the carpet double as flip-flops and a home with floorboards on the ceiling.