There's not a sharp edge in sight within Greek studio KLab's design for the Andronikos Hotel, which sits overlooking the Aegean sea on the volcanic island of Santorini (+ slideshow).

KLab designed the hotel to mimic the "cave-like" houses in this part of Santorini, which is at the Greek island's highest point in the village of Imerovigli.

"Vaults and arches were introduced to the existing structure in order to produce the unique spaces of Santorini vernacular architecture," said Konstantinos Labrinopoulos, KLab's founder and principal.

KLab, which is described as a "kinetic lab of architecture", has previously used such curved forms for an Athens pharmacy, which was wrapped in a round facade punctured by Braille lettering.

The 350-metre-square Andronikos Hotel was originally built in the 1970s as a large house. The architects renovated it, using waxed concrete flooring in colourful finishes inside and out. 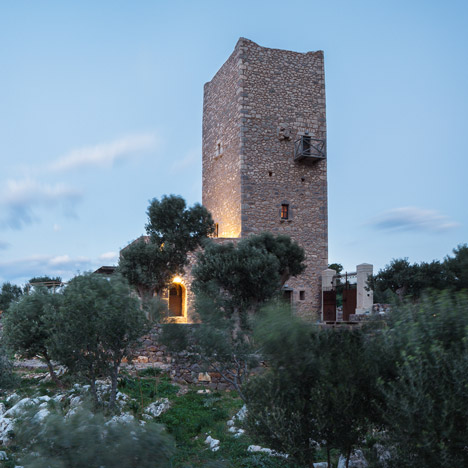 Containing six suites spread over four levels, the hotel is entirely decorated in the blue, green, crisp white and light brown hues of the Aegean.

Two suites fill each of the lower three floors, where they each have a private entrance and outdoor terrace facing the sea.

"Privacy and 180 degrees of incredible views even from inside was successfully created by elevating the bed area and opening new windows," said the studio.

To create more space internally, KLab removed the indoor stairs, adding external stairs to each of the floors. The reception and dining areas are on the top floor, where there is also an outdoor terrace.

Santorini is known for its white-walled architecture. Andronikos' island neighbours include a small house with two separate plunge pools and a holiday house with terraces built to blend into the mountainous setting.

KLab also designed a sister Andronikos hotel on Mykonos, another island in the Cyclades group.

Photography is by Akis Paraskevopoulos.