Rocks excavated from the site of this apartment building on the Greek island of Santorini were reused to form terraces and retaining walls so it blends with its mountainous setting (+ slideshow).

Greek studio Kapsimalis Architects  designed the two-storey building, which comprises four holiday apartments, for a Greek investor who lives in Australia. It occupies a previously vacant site on the side of Profitis Ilias mountain – Santorini's highest point – and enjoys sweeping views of the Aegean Sea.

The owner originally obtained permission to build on the site, which is in a protected nature zone, with a design by a civil engineer. However, he then asked architects Alexandros Kapsimalis and Marianna Kapsimali to develop the plan. The architects kept the same footprint but altered the design with an asymmetric conglomeration of white cubes inspired by local buildings.

"The building nods to the traditional style of local architecture, but in a modern way, with its plain white volumes, its asymmetric doors and windows, and the openness of the interior spaces," Alexandros Kapsimalis told Dezeen.

The architects, who recently completed another holiday home on the island, also designed the landscaping around the house. They used rocks excavated from the site to build a series of terraces and retaining walls.

"We wanted the landscaping to use the same materials and colours of the surrounding area, so it appears integrated with the steep mountain slope, and we wanted the white building to be the antithesis of these earthy colours," explained Kapsimalis. 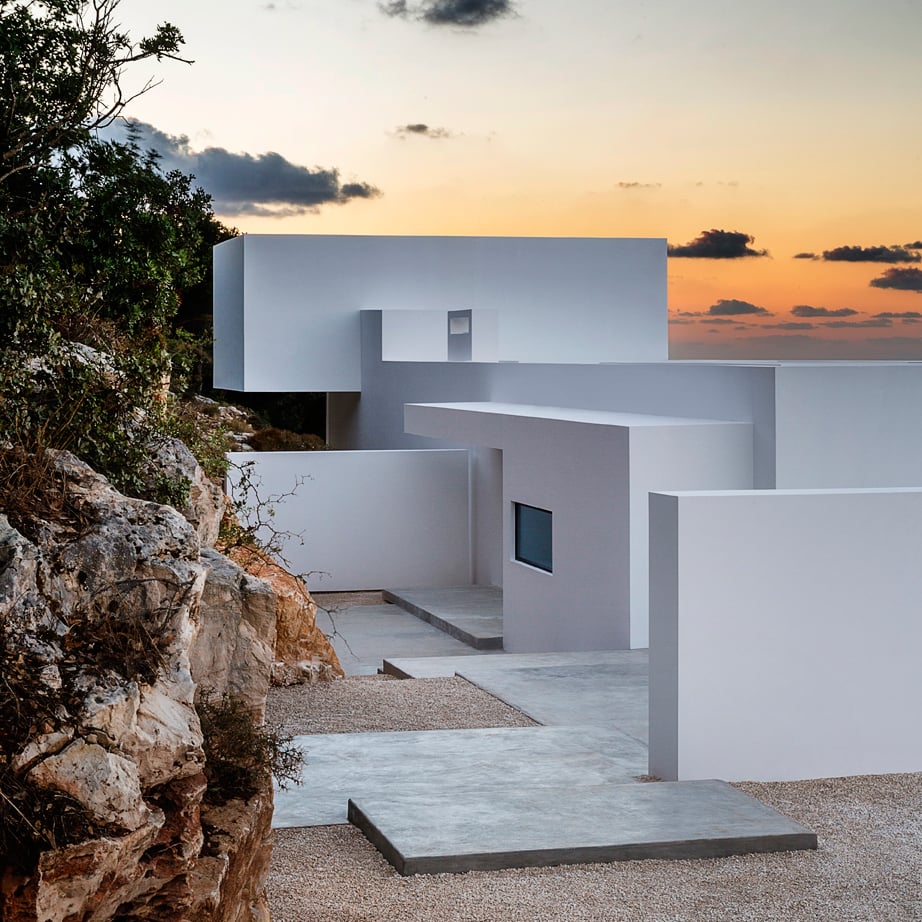 Other buildings that have used local materials to link with their setting include a garden studio near Bath, England, built into a hill with local limestone, and a house in Suffolk with a grassy sedum roof that slopes down to the ground to join with its marshy surroundings.

For the Santorini building, Kapsimalis Architects arranged two apartments on each level, all with their own south-west-facing terrace. On the lower level, there are two pools adjoined by seating nooks, which were sunken into the ground to maintain clear views to the sea from the apartments.

Partition walls were placed between the terraces to give the apartments privacy, but also allow for interaction between different guests.

"One of our main concerns was to create opportunities for interaction or separation between the guests," said Kapsimalis. "For this reason, we designed the building so they can approach each apartment from both sides, and we designed the terraces so that they are linked together."

Inside, the four apartments have open-plan layouts, with a bedroom, seating area, small kitchen, dining area and bathroom. Freestanding partition walls, open archways, and changes in floor levels were used to create subtle divisions between these different spaces.

The flooring and terraces were covered in the same grey cement plaster – a coating commonly used in the area – to create a sense of continuity between the interior and exterior.

The complex was built with a concrete frame and brick walls. The surfaces are covered in a white weatherproof plaster render, which will require maintenance every two to three years. Construction was completed in a year and cost €700,000 (£506,000).

"The biggest challenge was the excavation of the site and the processing of the solid stones, which was time-consuming," said Kapsimalis.

"Building within the protected nature zone was also a challenge," he added. "The complex was not allowed to exceed 200 square metres, and the height of each level could not exceed 4.5 metres."

Photography is by Julia Klimi.