Kirkwood McCarthy has added a black zinc-clad wing to the rear of a London house, creating a light-filled living space that sits between the garden and a new courtyard.

The studio – which was founded by Sophie McCarthy and Fiona Kirkwood – was approached by their former boss to transform the dilapidated Victorian property into a flexible family home.

The aim was to open the ground floor to the garden and bring in plenty of light, as well as to expand the footprint of the property to create plenty of space for the family of four.

The property, now named Courtyard House, had previously been extended at the rear. This created a kitchen with small windows, but meant the garden could only be accessed through a small conservatory.

Kirkwood McCarthy added another structure part way along the kitchen, expanding the space into a bright and airy open-plan dining and living room at the rear of the house.

This also creates a courtyard that links the original property, the previous extension and the new living area.

"At once widening the existing footprint and better capturing the southern garden aspect, the courtyard brings a connected, sun-filled sequence between the various living spaces," said the team. 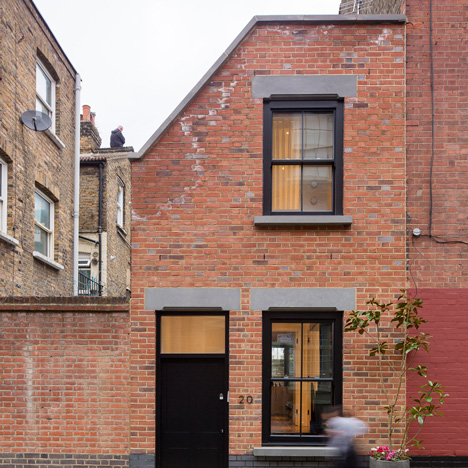 Two sets of glazed sliding doors open the space to the garden, and create a route between the front and rear of the property.

The exterior of the extension is clad in black zinc to distinguish it from the original property.

An asymmetric roof was designed to preserve both the canopy of a Mountain Ash tree in the garden and the view from a first-floor window to the garden.

Inside, this forms a 3.3-metre-high vaulted ceiling that creates a lofty living space.

The original window openings in the kitchen have been dropped to floor level so that the previous exterior now forms two brick columns between the kitchen and living area. Timber flooring features throughout.

The architects also refurbished the original property. This involved restoring the timber sash windows and adding a new coat of white paint to the timber panelled and brick walls.

On the first floor, the architects divided the old street-facing master bedroom, creating a family bathroom with Victorian-style finishes, as well as two equally sized bedrooms for the clients' twin children. A study sits atop the old extension.

A staircase with a black metal handrail leads to the converted loft. Here, an open-plan master bedroom features a large window that frames views to the tree canopy and garden below.

"Minimalist detailing and crisp black metalwork acknowledge the contemporary heritage of the newly created space, reading as a bookend pair with the ground-floor wing," said the studio.

Kirkwood McCarthy was founded by Fiona Kirkwood and Sophie McCarthy in 2013. The firm has also renovated a derelict workshop in east London to create a narrow brick home.

Other examples include a glazed addition to an early 19th-century house and a copper-clad roof extension.

Photography is by David Butler.