Visitors to this year's Manifesta art biennale can watch films while enjoying a swim in this floating pavilion, built by students to float on Switzerland's Lake Zurich ( + slideshow).

Entitled Pavillon of Reflections, the structure was designed and built by 32 students from Studio Tom Emerson, which is the design and research studio in the architecture faculty at Swiss university ETH Zurich.

The studio is led by Tom Emerson, co-founder of London studio 6a Architects – whose projects include the expansion of the South London Gallery and the extension of Paul Smith's Albemarle Street store.

Students were tasked with creating a public space for visitors to Manifesta 11 – a European biennial of contemporary art that has been running since the 1990s.

The timber pavilion, which is accessed from land by a bridge, is made up of five buildings that surround a public swimming bath with a large cinema screen above. Theatre-style steps are located opposite, creating a place to sit while viewing art films. 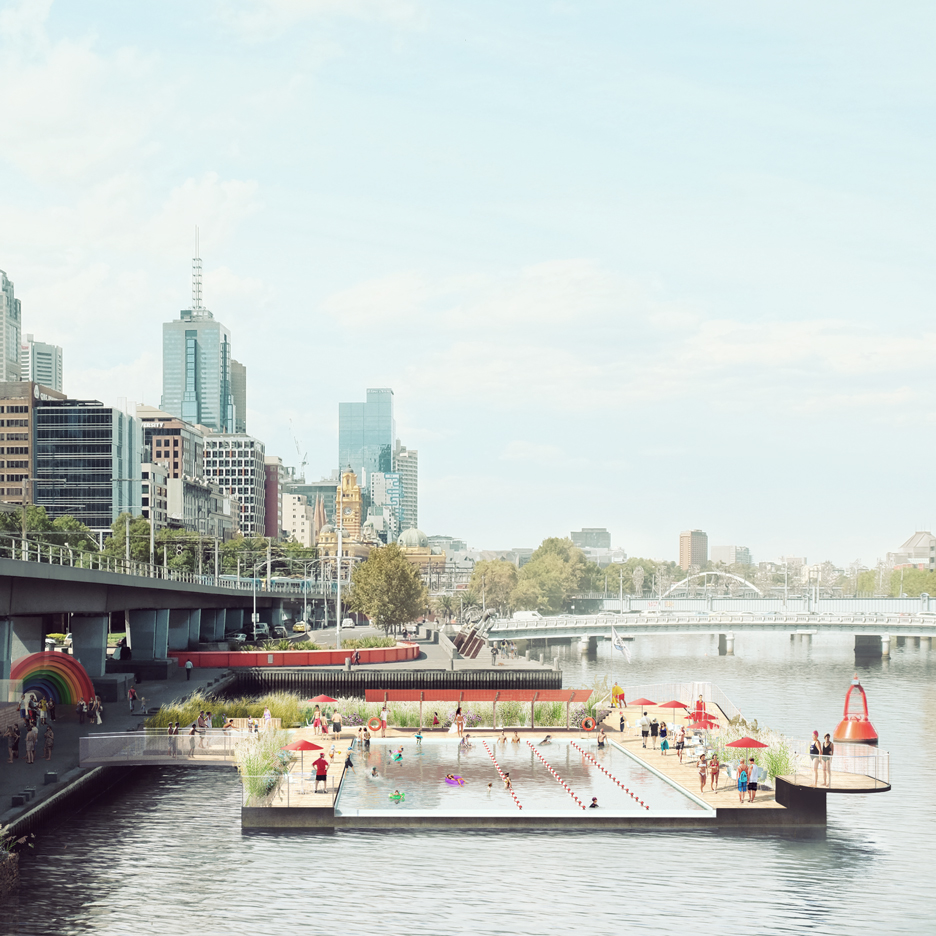 "The Pavillon of Reflections serves as the biennial's public forum: as a meeting point, as a cinema for screening films produced as part of the biennial, reflected in the public swimming bath, open to the public during the day," said the design team.

Three latticed structures are raised off the ground at different heights by stilts. These include a tower that acts as a beacon.

The other two provide cover to different areas surrounding the open space at the centre.

One features a double-pitched roof, sheltering a bar area below. The other is a mono-pitched volume that offers shade for a raised sunbathing deck, which is accessed by a set of steps and has changing cubicles – including a hair-drying station – underneath.

"A timber island, arranged like a fragment of intimate urban space enclosed by five buildings: a tower, a tribune, a bar, a sun deck with changing cubicles below, a central pool with cinema screen above, and three generous sets of steps that lead into the lake," said the team.

"Together with the tower, the volumetric roofs over the bar are built up from a distinct profile of timber lattice roofs."

Pavillon of Reflections is made almost entirely of timber and all joints were designed to be screwed together.

The Pavillon of Reflections will be open throughout Manifesta 11, which runs from 11 June to 18 September 2016.

The project is the latest product of the recent surge of interest in floating buildings, prompted by rising sea levels and a shortage of development sites.

Other recent examples include a wooden sauna on Seattle's Lake Union and a conceptual home for couples designed to split into two halves after divorce.