Lyrics and graphic visualisations are shown on the outside of this speaker, designed by Japanese studio Six Inc to sync with the song that's playing (+ movie).

The Lyric Speaker automatically generates the words to songs and displays them on its translucent, liquid-crystal exterior in real-time.

The speaker pulls lyrics from a cloud database to produce the text. Fonts are adjusted according to the genre of each song, so softer ballads call for more gentle movements and type, while vigorous rock songs are reflected in more angular choices.

The device analyses each track – using technology made by Japan's National Institute of Advanced Industrial Science and Technology – to determine its mood and structure, and the speaker's motion graphics engine generates moving imagery in response.

"I found that listeners couldn't catch all of the emotion of lyrics," the speaker's creator Jin Saito told Dezeen. "If they catch the meaning on the internet, they are just getting the information, they are not moved." 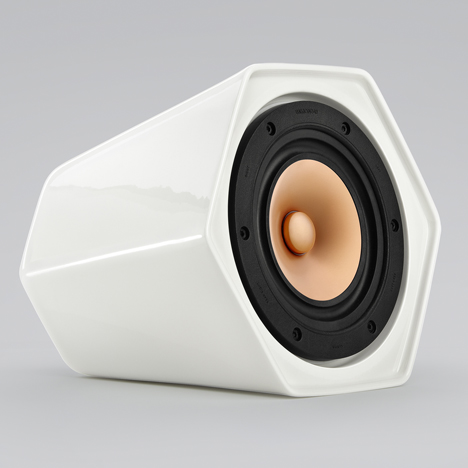 "I want to create the next generation music experience by combining the listening and sight experiences for users to have the most emotional time."

On the occasions the speaker can't match the song to an entry in the lyrics database, graphics are shown instead. The playlist is controlled through an accompanying app.

Six Inc received the Best Bootstrap Company award at the South by Southwest 2015 Accelerator competition for the speaker, marking the first time it has been awarded to a Japanese company.

Further unconventional speakers include a portable Brionvega device that packs into a miniature satchel, and a Mathieu Lehanneur speaker with 20 triangular faces.