Designer Nick Waldman has completed a cedar-clad residence and studio for a graphic novelist in Martha's Vineyard – an island just south of Cape Cod that is a popular destination for affluent summer vacationers (+ slideshow).

Called the Tree House, the studio building is located in the village of West Tisbury, known for its woods and farmland. It was built on a property with an existing cottage.

Topped with a gabled roof, the two-storey, 960-square-foot (89-square-metre) building includes spaces for working and sleeping, a garage and an outdoor deck. The dwelling was built for a graphic novelist who needed a quiet place to work.

The garage, located on the ground level, is clad in sheets of fibre cement board coloured dark grey. The top of the garage is ringed with a polycarbonate clerestory that enables light to enter the space and also exposes the structural "branches" that support the upper level.

To help keep costs down, the building was constructed using standard lumber boards. "All of the framing is exposed on the inside of the garage level with rigid insulation outside of the frame," said Nick Waldman, who founded his eponymous studio in 2010 after graduating from the Rhode Island School of Design.

Sitting atop the garage is a "cedar-shingled, light-filled studio in the trees," Waldman described. The studio is accessed via a wooden staircase that runs up one side of the building.

The interior features tall walls and large windows on the east, which frame views of the surrounding forest. The western wall has smaller widows to block views from the main house and ensure privacy. 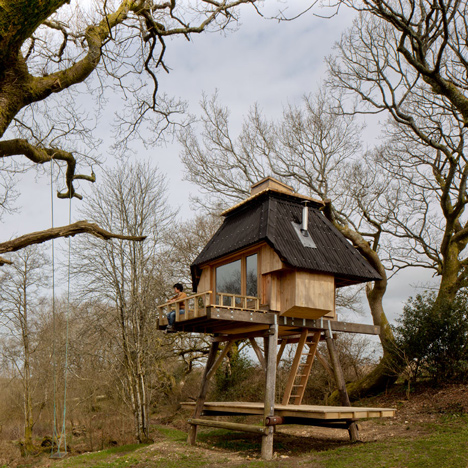 The architect placed the bathroom in the centre of the room, which divides the space into two distinct zones: one for working and the other for sleeping. Occupants can circulate around both sides of the bathroom.

"I didn't want to completely bisect the studio," said Waldman. "I wanted to keep it more like a loft, with the bathroom reading like an object placed in the space rather than a typical framed room."

A vaulted ceiling in the bathroom creates an open feel, and a large, operable skylight brings in natural light and fresh air.

The sleeping and working areas feature light oak floors with a natural matte finish and white-painted walls and ceilings made of sheetrock.

According to the architect, the graphic artist pins pages from his novels up on the walls, adding colour to the space. "It's kind of like a gallery idea in that respect," Waldman explained. "Keep the finishes quiet and let the art do the talking."

In the rear of the building, the architect placed a shallow balcony that is accessed through a sliding glass door. "A private, narrow deck in the back provides a place to pause and reflect with the nature that the studio sits in," said Waldman.

Other studio buildings in the US include an artist retreat in Connecticut that resembles a traditional red barn and a his-and-hers studio in the Hamptons clad in wood and polycarbonate panels.