This cedar-clad dwelling in Portland, Oregon, by local studio Beebe Skidmore Architects serves as a modern interpretation of the historic Craftsman-style bungalows found throughout the city (+ slideshow).

The project's name, 44th and Klickitat, refers to its address in the Alameda-Beaumont district.

Popular in the early 1900s, the style emerged from the Arts and Crafts movement in England.

The clients are a couple with two young children who recently moved Portland from Chicago. The design process started before they relocated, with meetings taking place via Skype.

"It was characterised by discerning design standards, a commitment to their vision, iterations of the team involved, and a desire to have a finished home that would prove – especially to neighbours – that new construction could fit into an historic district."

The aesthetic of the house was influenced by the historic context, as well as the clients' attraction to clean lines and a restrained palette of colours and materials.

Topped with a slightly angled roof, the two-storey dwelling recalls the classic Craftsman home in term of proportions, but any sense of bulk is broken up by "shifted facade planes and projecting bays and surfaces".

The facades are clad in various-sized boards and battens made of smooth cedar. A dark green paint scheme helps hold the composition together, the architect said.

"The objective with the design of the exterior siding was to use materials that are congruent with the neighborhood, yet elevated to a new plane with a clean, crisp appearance," the studio explained.

The front elevation, which faces west, is defined by a recessed porch, a setback on the second level and large, glazed apertures.

Providing ample daylight was a guiding concern during the design process, resulting in facades punctured with a mix of square and rectangular windows. The corners feature glazing on both sides.

"Windows placed in the corners bring equality to all four sides of the house, and allow additional diagonal views to lighten the overall massing," the firm said.

Concrete stairs ascend to the elevated porch, where the architect sheathed the walls and ceiling in warm-coloured wood. 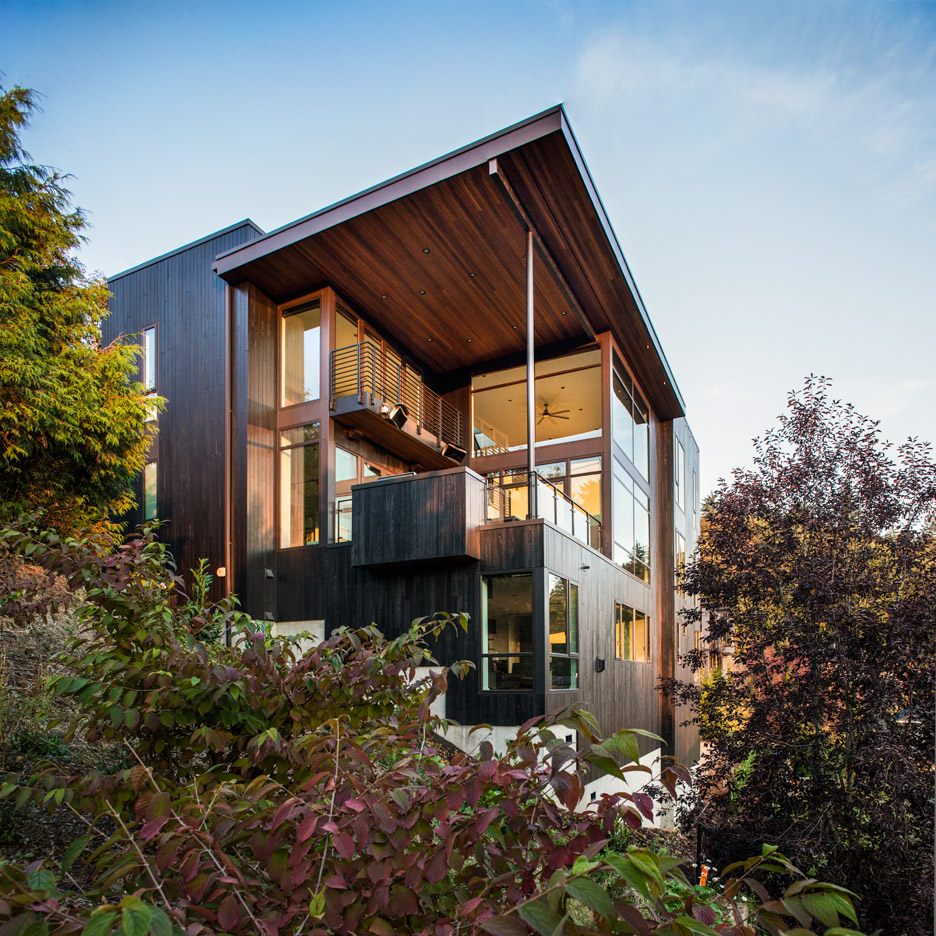 Occupants enter into a foyer that merges with a living room, dining room and kitchen — all of which form a "zigzag of open space" that leads to the backyard.

A split-level side entrance, which connects to the kitchen and basement stairs, enables easy access from the garage or sidewalk.

Inside the main living zone, a modern, slim-bricked fireplace anchors the space, while a grey buffet marks the transition from the living room to the dining room. The buffet performs multiple functions, from art pedestal to DJ booth.

A retractable glass door leads to a rear patio and the backyard.

The second storey features three bedrooms, along with an office that could be converted into a bedroom in the future.

In the master suite, which is located in a front corner, large windows enable occupants to watch the sunset and see views of downtown Portland in the distance.

The basement contains a bedroom and family room.

Finishes in the home include white oak flooring that is "not overly slick" and white tile in the kitchen.

Other dwellings in Oregon include a residence with soundproof rehearsal spaces for a family of musicians and a wooded retreat that was built atop a pond and is entered via a bridge.

Photography is by Bruce Wolf.