Called Hoogan & Beaufort, the restaurant – which serves continental cuisine – is located in a former manufacturing facility in the city's Rosemont borough. The factory was used to build rail cars from the early 1900s to 1992.

The owners, chef Marc-André Jetté and sommelier William Saulnier, wanted a space that embodied both modernity and tradition.

"The mandate was to create a modern 70-seat restaurant with an intimate and comfortable atmosphere, while paying homage to the building's past," said Appareil Architecture, a young Montreal studio that takes inspiration from Nordic design.

"Raw materials such as steel, wood and concrete were selected to complement the spirit of the place," said the architects. "The style is simple, but warm."

The architect worked with artisans to create bespoke decor, including wood-backed bar stools and dining chairs with blue leather upholstery. The countertop is made of maple, while the hanging lamps are metal.

"The lights were found in an industrial lot," said Kim Pariseau, who founded Appareil Architecture. "We bought them, repainted them and changed the light inside."

Throughout the space, the colour palette consists of black, grey and soft white. 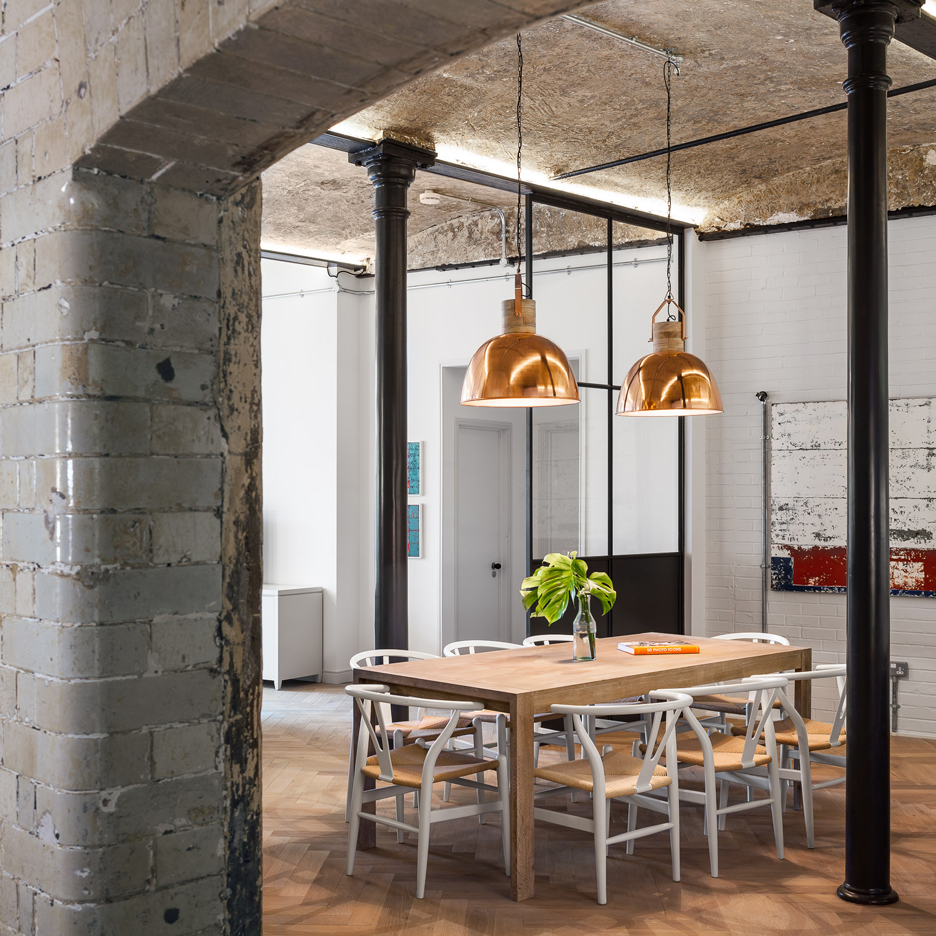 In order to foster a lively atmosphere, the architect placed an open kitchen at the centre of the room, where food is prepared on a custom-built fire pit. Guests can have a cocktail around a large bar that encircles the chef's workspace.

"We wanted to recreate the festive atmosphere that is found around a bonfire," said Pariseau.

On the perimeter of the restaurants, the studio created a more intimate experience by placing tables along large windows, away from the centre of activity.

On one side of the eatery, a shelving unit is filled with bottles of wine and small firewood logs.

"We aimed to have a stylish but unpretentious space where people would want to linger, feel at home and enjoy the chef's universe," explained Pariseau.

Other new eateries around the globe include a restaurant and cocktail bar by Space Copenhagen that pairs deep blue velvet seating with mirrored accessories, and a London restaurant by Tom Dixon that features a pink concrete bar, green leather booths and a cabinet of curiosities.

Photography is by Alison Slattery.