Dixon worked with his architectural interiors practice Design Research Studio on the project, which transformed a Regency building on The Strand, overlooking Trafalgar Square.

Taking inspiration from Admiral Nelson, Duke of Bronte, who stands upon the square's famous Nelson's Column, the restaurant's interior is loosely themed around British collectors and explorers of the Victorian era.

The Regency-era building has a Portland stone facade, traditional colonnade terrace and two-storey arched windows on the outside. 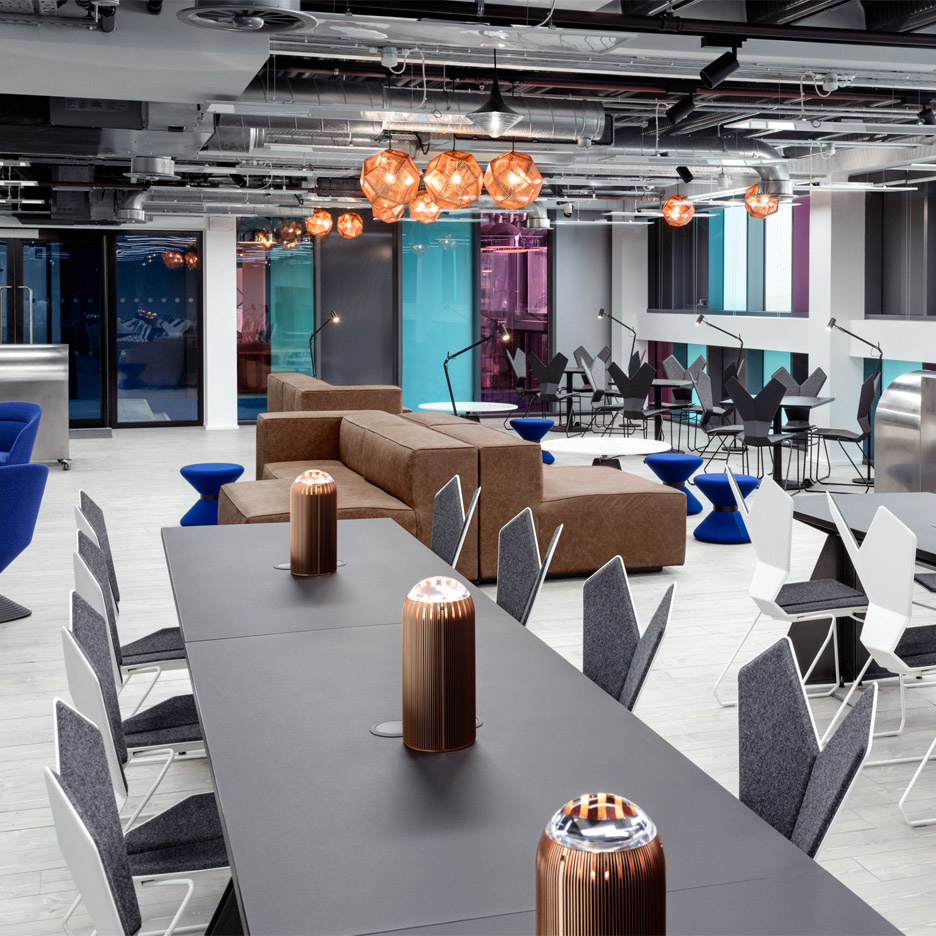 The inside, a blank slate when the project began, is anchored by its key structures: a pink concrete breakfast bar, a green granite kitchen, a pewter cocktail bar and custom furniture that includes jade-green leather banquet seating.

"We've added some fixed architectural elements like a big pink concrete bar at the front and a big pewter bar at the back, both of which are substantial and will age gracefully and bed in," Dixon told Dezeen. "I like things that feel like they have a sense of permanence, and I think that place demands it really."

"The trick with bar and restaurant design really is durability, and to try and find materiality that benefits from a bit of wear and tear."

Balustrades, shelving and screens in passivated zinc, which is gold-coloured but has a faintly iridescent quality, complement the green and pink palette in the space.

Serving international cuisine, Bronte is the second venue Dixon has designed for Adam and Trevor Davies after Circus, a London bar and restaurant that also incorporates cabaret-style acts.

Bronte's theme of historical travel and exploration comes in the form of a cabinet of curiosities – a way of displaying collections of objects that emerged in the 16th century.

"I thought we'd tie it down to this idea of creating collections and going around the world in ways that people did in Nelson's time, whether that was Darwin, or people going on grand tours of Europe collecting things," said Dixon.

Bronte's wall shelves feature objects that Dixon and his team brought together from market, online auctions and their own collections. They are arranged in themed groupings – nautical, botanical, geological – in different sections of the venue.

Some of Dixon's products are also installed in the space, which features a main room, mezzanine and a more intimate back bar. Gold Fade pendants hang over the pink concrete bar, while the geometric etched metal forms of Curve surround the green granite kitchen.

Architectural lighting hidden within coving and architraves is used with the intention of softening any harsh edges.

The designer's other recent interiors projects include London co-working space Atrium, which is kitted out in his furniture and lighting.

He is currently also expanding his retail business, with new stores in Los Angeles and New York.