Home rentals website Airbnb has created a multipurpose office space based on traditional Japanese interiors and neighbourhoods for its Tokyo employees (+ slideshow).

The new Tokyo workplace is in the busy neighbourhood of Shinjuku. Working alongside Suppose Design Office, the company's Environments Team aimed to bring some of that ambience inside.

To achieve this effect, they created building-like rooms and incorporated references to traditional Japanese tea rooms and engawa flooring.

"The main concept of this project was to recreate the feeling and vibe of a Tokyo neighbourhood," said Makoto Tanijiri and Ai Yoshida of Suppose Design Office.

"Instead of using simple walls, we laid out building-inspired volumes to articulate the space, dividing the various functions while keeping a continuity throughout the whole office."

To balance this, the designers injected natural elements into the space to make it calming for employees.

When staff enter the office, they arrive in a reception area reminiscent of an outdoor cafe with a double-height atrium. Park-inspired work areas are made up of wooden communal tables and chairs.

A path then leads to a series of alcoved meeting rooms clad in wooden panels. As with other Airbnb offices, these meeting rooms were based on listings on the company's site, in particular Prague, Tijuana and Barcelona.

Inside the Tijuana meeting room, artwork and vintage objects donated by the mother of one of the employees decorate the walls.

For the main office space, the design team worked closely with employees to devise a range of work configurations suitable to their needs. 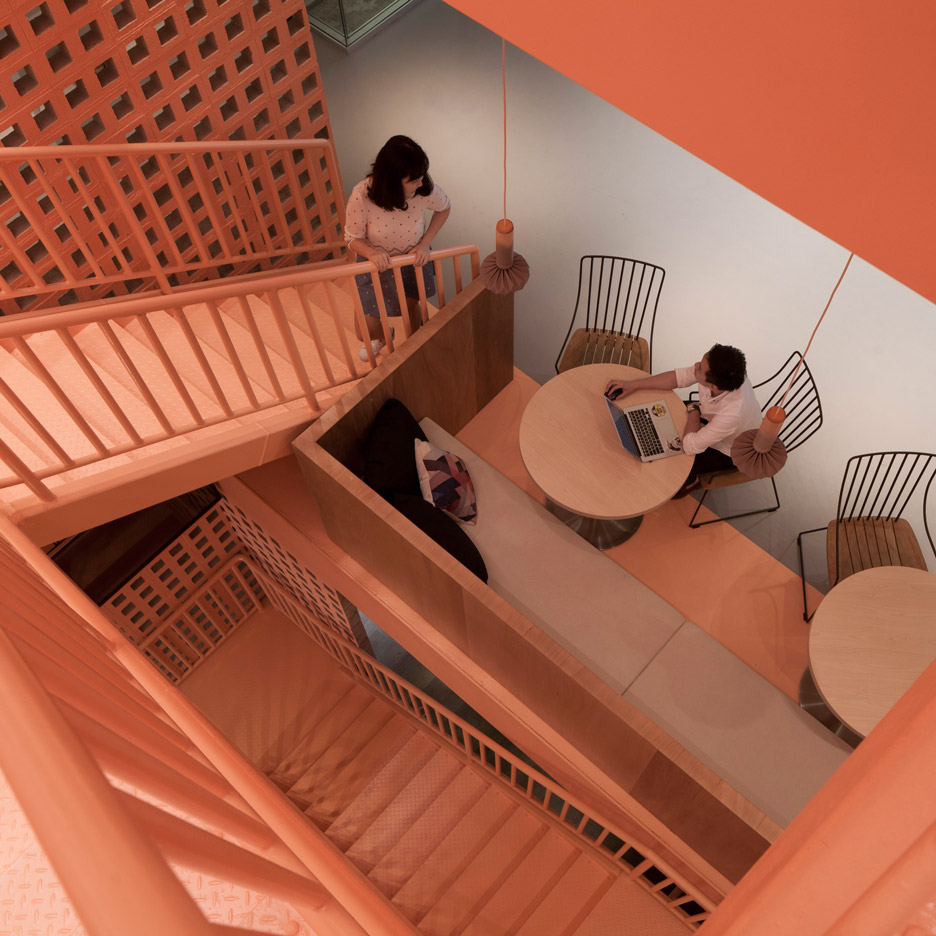 Another key element of the office is the Engawa area – an elevated platform offering views of Shinjuku. Traditionally used to refer to the wooden strip of flooring immediately before windows inside Japanese rooms, the term engawa has come to mean the veranda outside the room as well.

Airbnb's Engawa space is covered with tatami mats and cushions so that employees can sit on the floor to work at low level desks.

Phone booths for Skype calls are based on traditional tea rooms. They are made from local white oak with rice paper film to emit a soft, glowing light.

"The general office is a mix of outdoor-inspired furniture and lighting, trees and planters, and elements inspired by the Japanese traditional architecture," said Tanijiri and Yoshida.

Airbnb was founded in 2008 by Rhode Island School of Design graduates Joe Gebbia and Brian Chesky as a site that would allow travellers to stay in ordinary homes instead of hotels.

In an interview with Dezeen, Chesky talked about how sceptical Silicon Valley had been that two designers could build a successful home-stay booking website. Airbnb is now bigger than most hotel chains.

Ilse Crawford, who in 2014 was one of several designers to install their interpretation of "home" in London's Trafalgar Square, told Dezeen that Airbnb is causing a sea-change in attitudes towards design by allowing people to experience stylish interiors first-hand rather than via magazines and websites.