A brick volume containing a games room balances on steel beams that raise it above the sloping plot of this house in the Mexican city of Zapopan (+ slideshow).

Designed by architect Delfino Lozano, Casa G is a holiday home that accommodates a games room and terrace alongside living areas and bedrooms. It occupies a long and narrow plot that ascends from front to back between two existing boundary walls.

"The length of the land allowed us to trace a central axis that connected the main spaces of the house," said Lozano.

"Its unevenness originated a perpendicular axis where a retaining wall was raised, generating two clearly defined areas: social on the lower part, and private on the highest part of the land."

The home is situated in the northwest of the city, where Lozano previously completed a house featuring low-cost materials and a larder slotted beneath its staircase.

A paved parking area and outdoor courtyard at the front of Casa G culminates in a stone retaining wall, upon which steel beams support an elevated terrace rest.

The terrace extends along the centre of the site towards the main part of the house. The linearity of the concrete slabs lining its underside contrast with the rough surface of the stone retaining wall. 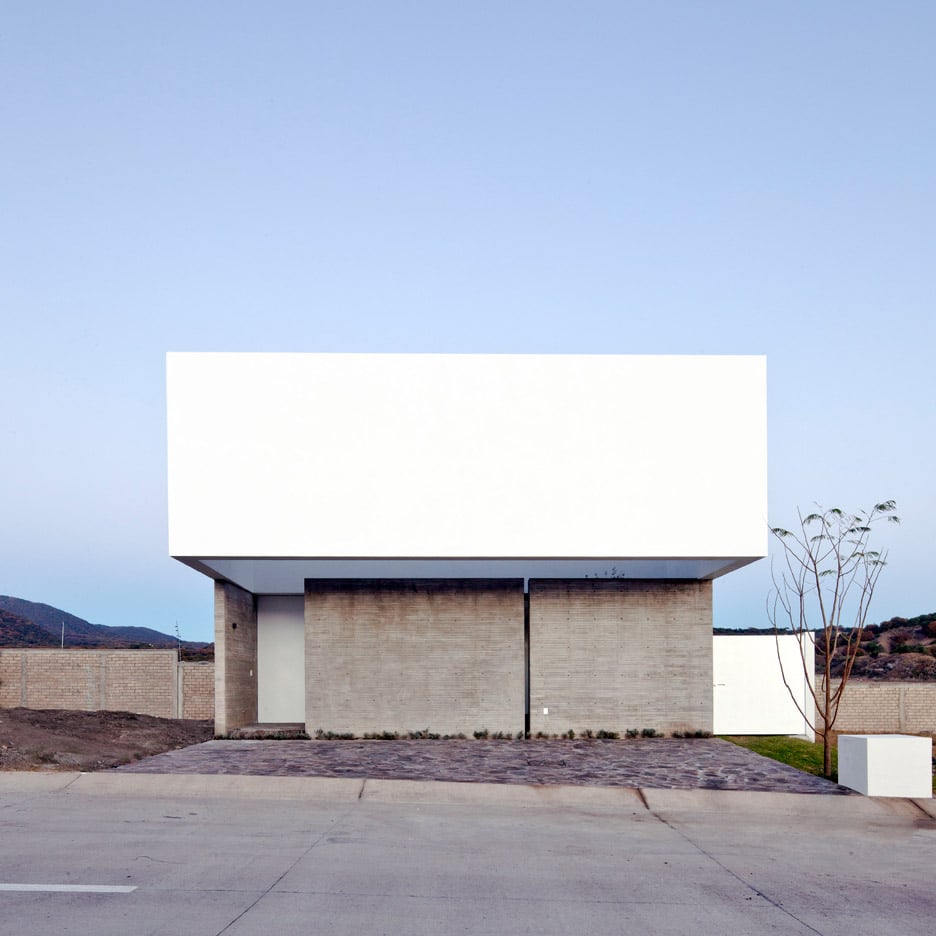 The small brick structure intended to be used as a games room rests on intersecting beams that project to meet one of the retaining walls and the front of the house. Concrete steps connect the terrace level outside with the garden.

A pivoting wooden door set in an arched vault leads from the street through a brick volume containing bathrooms and other services to the paved outdoor space.

A stone pathway on one side of the plot converges with a set of stairs that ascend towards a tree set in a fountain outside the house's entrance. A mast that projects over the top of the stone wall will eventually support a piñata.

The entrance opens into a foyer with the kitchen to one side and a TV room – that can also be used to accommodate guests – on the opposite side.

The foyer extends into a large central living and dining space lined at either end by glazing that provides plenty of natural light to the brick-clad interior.

At the rear is a small garden containing a tree, while at the front is a terrace with a hammock.

A fireplace and shelving are set into the brick walls, and folding wooden screens above the fireplace can be opened to connect it with the kitchen.

On the far side of the living area is another small foyer providing access to the master bedroom at the front of the building and a second bedroom at the rear. Each room has an en suite contained behind a grey-painted brick wall with a slit window above it.

Brick is used throughout the building's internal spaces, with the same concrete slabs employed on the terrace applied to the ceilings of the living areas. The warm tone of the brick is complemented by the rich grain of native parota wood.