The reservation-only lounge is named Himitsu, which means "secret" in Japanese. It was created by London-based Design Research Studio, the architecture and interiors studio overseen by Dixon and launched in 2002.

The project's client owns one of the city's best-known sushi restaurants, Umi Sushi.

For the new 1,300-square-foot space (121 square metres), the team incorporated a range of materials and furnishings to create an environment that feels "raw yet sophisticated".

"Inspired by Japanese mixology and American prohibition, Himitsu is a darkly theatrical speakeasy, peppered with the rich colours and textures," the studio said.

The designers also drew inspiration from "the emotion and drama" in King of Birds, a painting by local artist Todd Murphy that hangs in the space.

Visitors must have a keypad code to get into the lounge. Once inside, they step into an anteroom with floors and walls sheathed in black-stained oak. The vestibule is punctuated with a geometric maitre'd stand. 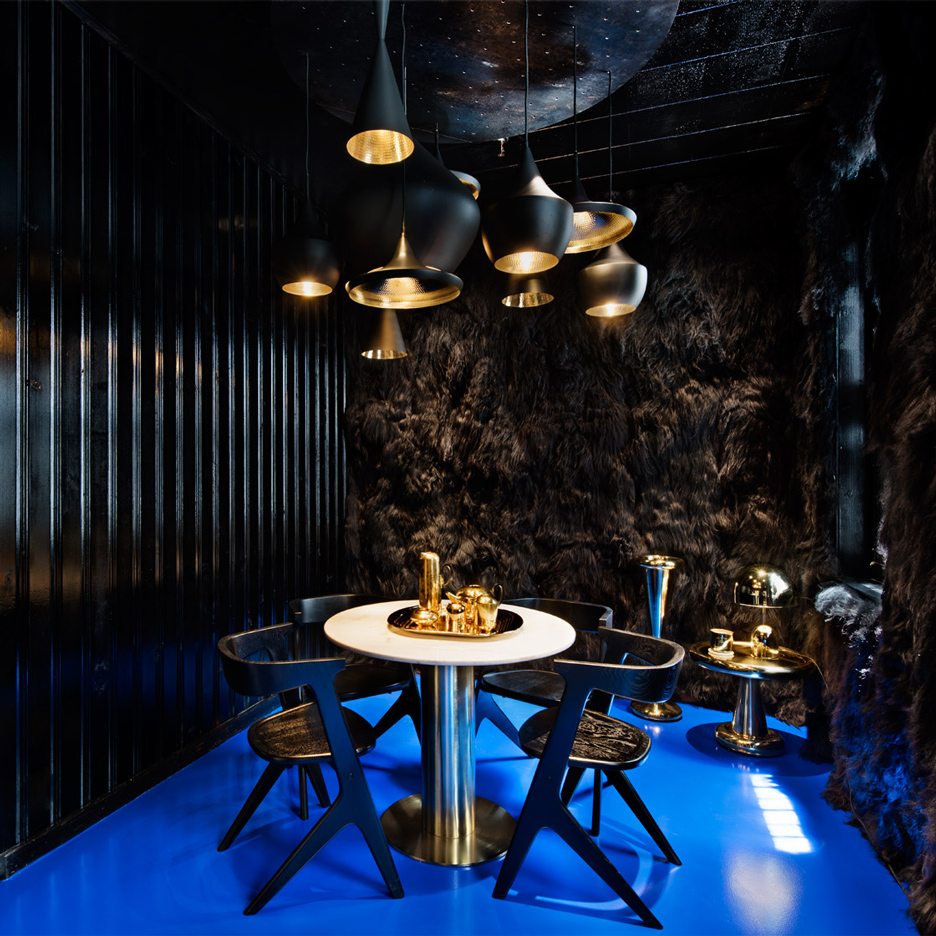 A sliding door leads from the foyer into the bar – a linear, double-height space with a mezzanine.

A focal point of the lounge is an illuminated, 20-foot-long (six-metre) copper bar, which was designed to complement the craftsmanship that goes into making artisanal cocktails. Copper is also incorporated into the back bar and upstairs loft.

The tabletops, fabricated of smoked mirror and natural marble, rest on industrial-style roll bases designed by Dixon. The two components "form a tactile landscape of surfaces that explore texture, distortion and the reflection of rough against the smooth", the team said.

In the centre of the room, the designers suspended a number of Melt pendants from Dixon's latest range of lighting and furniture. The fixtures draw reference to molten metal and distorted natural forms, and "emits a hallucinogenic glow that casts an ethereal luminosity and sets the tone for the rest of the bar".

Other decor include leather banquettes and a range of contemporary chairs.

The Himitsu bar is part of Dixon's recent expansion into the US. The UK-based designer recently opened a new showroom in Manhattan's SoHo neighbourhood, along with a shop in Los Angeles.