Lu and Wang founded Amateur Architecture Studio in Hangzhou in 1997. Their best-known projects include the Ningbo History Museum – constructed using recycled bricks – and the China Academy of Art in Hangzhou.

The lecture, for which Dezeen is media partner, takes places on 11 July 2016 in the main galleries at the Royal Academy's Burlington House on London's Piccadilly from 6:45pm to 8pm. 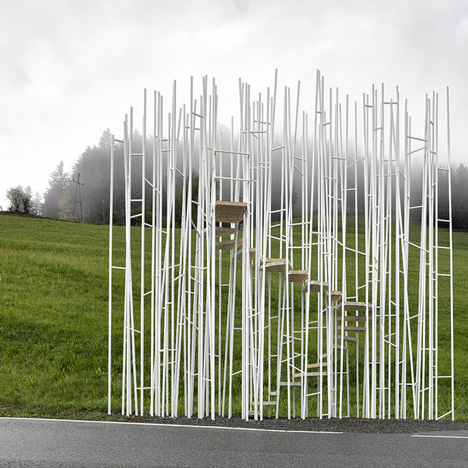 They will be the first Chinese architects to deliver the prestigious annual lecture.

Wang and Lu are known for using recycled and traditional materials and techniques in their projects, which aim to recognise and incorporate their country's history while responding to the context of local economies.

In an interview with the LA Times, Wang described his buildings as "templates for modern interpretations of the pagoda, the temple and the courtyard".

"Before I designed the Xingshan campus and Ningbo History Museum, a lot of people thought of me simply as part of the avant-garde," he said. "When I finished those projects, some critics were very harsh. They said I had betrayed the modern movement."

Their guesthouse for the academy, one of 22 designed by the architects on the its Xiangshan Campus, was shortlisted for the 2014 Design of the Year by London's Design Museum.

Recent projects have included a bus stop in the tiny Austrian village of Krumbach – one of a cluster designed by world-famous architects.

According to Wang, the name of their firm is intended to reflect that the "handicraft aspect" of their projects is more important than what he has described as the "professionalised, soulless architecture as practiced today".

"It should not be even referred to as an architect's office because design is an amateur activity and life is more important than design," he said of Amateur Architecture Studio in 2012. "Our work is constantly refreshed by various spontaneous things that occur. And, most important, we encourage independence and individualism to guarantee the experimental work of the studio."

Wang was named as the 2012 laureate for the Pritzker Prize, architecture's equivalent to the Nobel. In an interview with the LA Times he said that the award should also have been given to Lu, who is his wife as well as his business partner.

"His buildings have the unique ability to evoke the past, without making direct references to history," said the jury for the 2012 Pritzker Prize.

"The question of the proper relation of present to past is particularly timely, for the recent process of urbanisation in China invites debate as to whether architecture should be anchored in tradition or should look only toward the future," added the citation. "As with any great architecture, Wang Shu's work is able to transcend that debate, producing an architecture that is timeless, deeply rooted in its context and yet universal."

Wang was named dean of the China Academy of Art's architecture school in 2007, where Lu is also a professor, after serving as head of the department since 2003.

The Royal Academy's Annual Architecture Lecture takes place each year in its galleries in London's Piccadilly to coincide with the institution's Summer Exhibition.

Tickets are available directly from the Royal Academy's website and cost £22, or £12 for concessions.

It will be the 26th lecture in the series. The list of previous participants reads like a who's who of contemporary architecture, with Norman Foster, Hans Hollein, Alvaro Siza, Peter Zumthor, Frank Gehry, Renzo Piano, Elizabeth Diller of Diller, Scofidio + Renfro, and Rem Koolhaas among the speakers.

Last year's lecture was given by Danish architect Bjarke Ingels, designer of this year's Serpentine Galery Pavilion in Kensington Gardens, who revealed details of his proposal to turn the Battersea Power Station chimneys into giant Tesla coils.

Portrait of Lu Weny and Wang Shu is by Zeng Han.

More news about the Royal Academy