The Performance and Exhibition Centre forms the centrepiece of The Hub, a huge mixed-use complex near one of Shanghai's main airports. Architect Ben Wood designed the exterior of the five-storey building, but Neri&Hu was tasked with the entire fit-out.

The studio based its design on natural landscape scenes, namely forest tree canopies and rock formations.

This is most evident in the main exhibition hall – a two-storey space where walls of grey sandstone create an elaborate sequence of balconies, canopies, setbacks and openings.

These striped surfaces resemble the striated surfaces of carved rock, but are much more geometric in shape.

The only injections of colour come from the dense canopy of walnut- and oak-covered aluminium sticks – intended to look like tree branches – and the walnut balustrades that front the various balconies.

"The interior concept draws inspiration from landscape to create a nature-like environment that provides retreat from the heavily built context and visual overload of contemporary culture," said the team, which is led by architects Lyndon Neri and Rossana Hu. 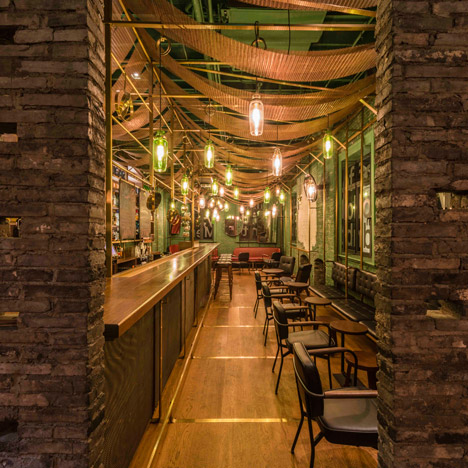 "The performance centre interior is perceived as a five-storey urban oasis in the form of a solid rock set inside the exterior envelope," they added. "Spaces are carved out and programmatic elements inserted."

Visitors can enter the building directly from the subway station, which brings them in via the basement.

To emphasise the feeling of emergence from underground, Neri&Hu added an escalator that ascends two floors. It offers visitors a simple route up to the exhibition hall, making it easier to navigate the building.

From here, they are led to the building's other facilities, which include a theatre, various bars and VIP lounges.

"Wherever a visitor is, his/her role as the spectator and the partaker of a performance on stage is constantly alternating as one meanders along the cavernous galleries and bridges," said Neri&Hu.

The 750-seat theatre is located at the top of the building. Described as a "treasure box", the space features walls of wood-covered screens, exposed ceiling fittings and tiered seating.

Other spaces are slotted into the sandstone volume. These include the bars, which are intended to look like wooden houses, as well as tiled bathrooms, golden toilet cubicles, a cigar room and bronze-hued lifts.

The VIP areas feature different designs. One is lined with tiles hand painted with agricultural scenes that reference the district's heritage.

There is also a lounge framed by golden mesh screens and spherical pendant lights.

Neri&Hu has worked on a number of projects in its home city, ranging from a house-like Camper shop to a 1950s-inspired burger restaurant and a hotel in an abandoned former army headquarters.

It also runs its own design gallery, shop and event space in a former colonial police station in Shanghai's Jingan district.

But its founders have also complained that China's architects "feel lost" and need to establish a "modern Chinese architecture and design language" – something they have tried to achieve with projects like this one.

The Hub is one of a number of new additions to Shanghai's fast-growing Hongqiao district, which the architects describe as a "vibrant neighbourhood".

MVRDV and Aedas are creating a new business district in the area, with highlights including an office block shaped like a four-petalled flower.