To gain views of Lake Erie from a sheltered plot, architecture firm Kariouk Associates designed this Canadian house to include a "love nest" that pokes above the treetops (+ slideshow).

The home on Niagara Peninsula is located close to the lake, but is surrounded by trees so lacks the draw of a water aspect.

"The challenge was to design a new home with a view of Lake Erie for a client who did not want to pay the cost of a lakeside property," said Ottawa-based Kariouk Associates.

"Hence, the site he acquired was a very long and narrow lot across the road from other homes and 2,000 feet away from the shore of the lake."

Local planning laws stipulated that new buildings could be no higher than two storeys, however nothing in the codes said that an upper floor had to be contiguous to the lower level.

Therefore the architects' solution was to create a periscope-like master suite with enough height to broach the treetops, angled to provide a panoramic vista from a glazed front wall and balcony.

Another requirement of the property was to attract a partner for the client.

It is named A Bower House after Bowerbirds, a species known for its unusual courting rituals – the males build elaborate structures to attract mates.

"The project was required to serve as a lure for a mate – a love nest as it were, perched in the treetop – complete with two bedrooms for two yet non-existent/future hatchlings," said the firm, which has also designed a house in Quebec with a patterned facade of concrete bricks. 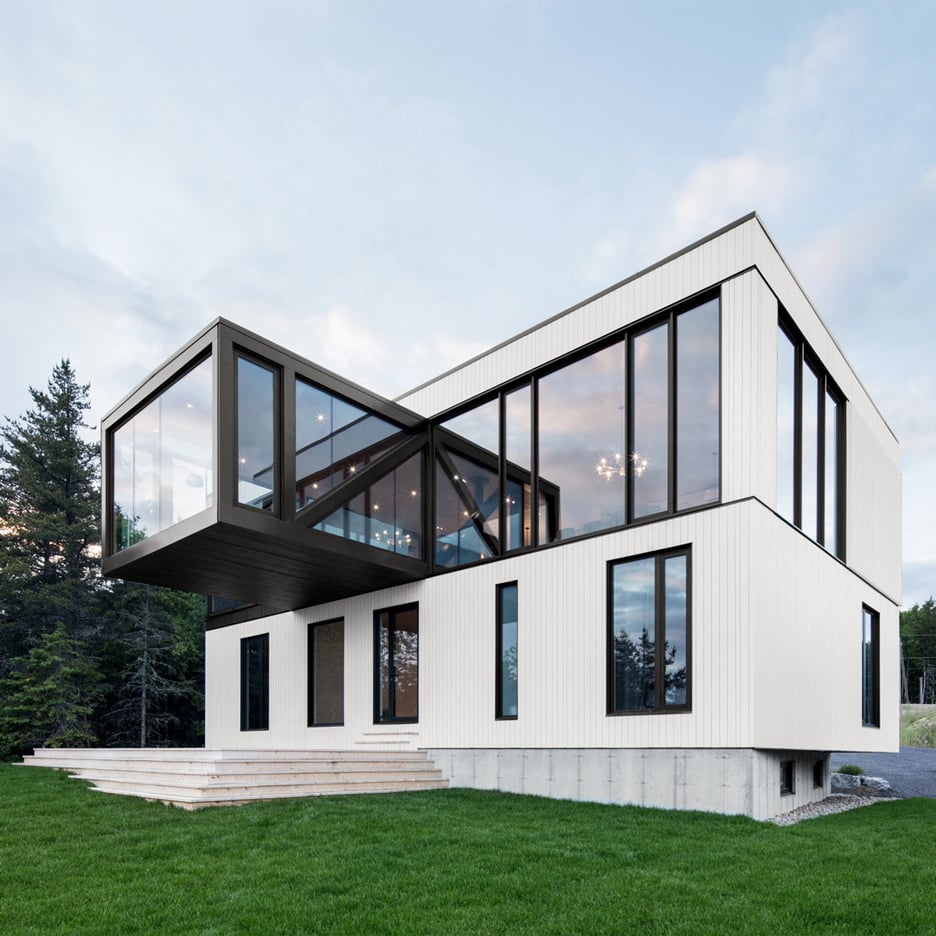 "As such, this love nest aimed to both woo and wow a mate, while also demonstrating proper family-planning and money-management skills."

The main volume of the house is long and thin, and divided into two halves. At the front is a garage and pool room, while the back portion contains an open-plan living and kitchen area, as well as the two extra bedrooms.

A small entrance hallway with a WC and cloakroom connects the two sections, and also leads to the angled stairwell.

The interior is very minimal, and majority of the surfaces are white. Black accents can be found in the kitchen as cabinet fronts and countertops, and the staircase is also dark.

Stripes of black and grey boards clad the exterior, hiding a timber frame used to build the lower floor, and the steel truss that forms the stair tower and upper level.

The project was deemed a success, as the client got married two weeks after these photographs were taken. Local planning laws have also been rewritten since the building completed.

Photography is by Photolux Studio/Christian Lalonde.